You are here: Home / Town Happenings / 5 Blockbuster Express Movies for $2 at Vons 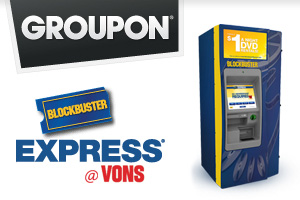 Who doesn’t love Groupon?  Some of us love it so much we scour the Groupon deals coming out of other cities in the U.S. and when we find one that is a “National Deal” — we jump on it!

There was a National Groupon deal that came out of another city this morning — and we can take advantage of it at the Boulder City Vons grocery store!  Blockbuster Express is offering FIVE one-night movie rentals for only $2…instead of the usual $1 each.  And the coupons don’t expire until May 1st, 2013.  Yes…more than 2 years from now!  Pretty sweet deal.

You can buy this Groupon until Monday at midnight…unless they’ve put a cap on the number that can be purchased…in which case, I’d jump on it quick.  Click on the button below to score your discounted Blockbuster Express movie rentals!

Remember how Chilly Jilly's first started? In that tiny little location across … END_OF_DOCUMENT_TOKEN_TO_BE_REPLACED

In an effort to help folks who may not feel safe venturing to the grocery store, … END_OF_DOCUMENT_TOKEN_TO_BE_REPLACED

We are celebrating Mother's Day and showcasing lots of items for gifts. Purses, … END_OF_DOCUMENT_TOKEN_TO_BE_REPLACED