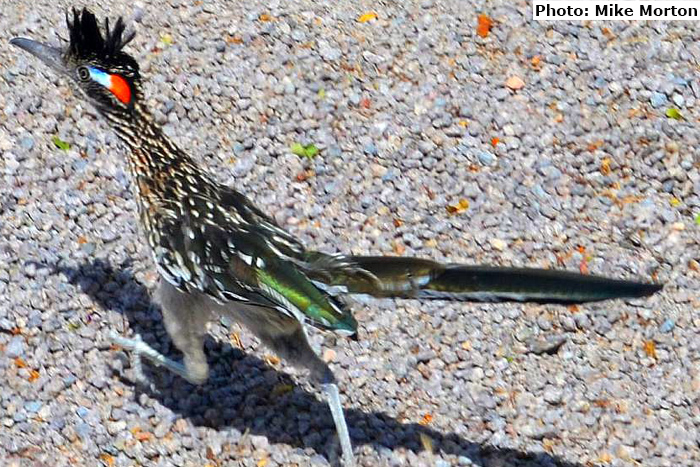 We found this photo of a pretty little roadrunner snapped by fan Mike Morton. How he managed to catch him…we’ll never know.

But we thought we’d like to learn more about him, so we asked a highly intelligent ‘nerd friend’ if he could find out more about him, and he did! (Ya gotta love Boulder City, you never know who you might find!)

According to him, and we quote:

“This is a photo of a Greater Roadrunner, found in the SW US and northern Mexico. There is another roadrunner (the Lesser Roadrunner) that is found somewhat to the south, trending all the way to Central America. According to my “The Sibley Guide to the Birds” (2000, Alfred A. Knopf/Chanticleer Press) the genus/species is /Geococcyx californianus/. Roadrunners are in the cuckoo family.

Sibley states that roadrunners are smooth, strong runners and (quoting here): “…[The] standing bird adopts a variety of comical poses”. Anyone who has seen any of the “Wiley Coyote and Road Runner” (Looney Tunes, 1949 and thereafter) cartoons can easily confirm this claim. However, (Sibley again) the voice is “…a slow, descending series of about six resonant, low-pitched coos…”. Doesn’t sound like a “Beep beep!” to me!

Hopefully there aren’t any Wile E. Coyote’s out there try to offer this little fellow some Acme bird seed, drop an anvil on his head or pull any of those other shenanigans, because we think he’s sort of cute!

Remember how Chilly Jilly's first started? In that tiny little location across … END_OF_DOCUMENT_TOKEN_TO_BE_REPLACED

In an effort to help folks who may not feel safe venturing to the grocery store, … END_OF_DOCUMENT_TOKEN_TO_BE_REPLACED

We are celebrating Mother's Day and showcasing lots of items for gifts. Purses, … END_OF_DOCUMENT_TOKEN_TO_BE_REPLACED