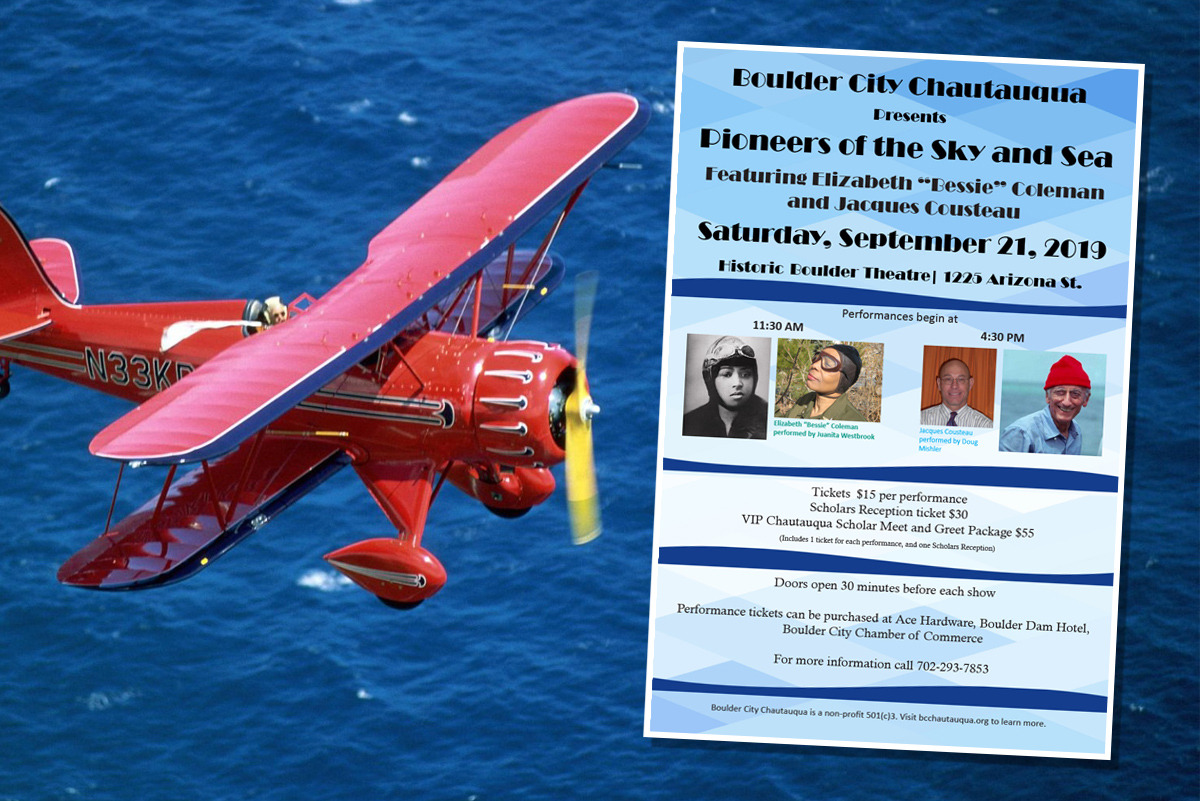 We love this annual event here in town that is always something truly special to sit and experience.

This year, we get to see two performances, called ‘Pioneers of the Sky and Sea‘ featuring Elizabeth ‘Bessie’ Coleman, and Jacques Cousteau. Showtimes are 11:30am and 4:30pm, at the Historic Boulder Theatre (1225 Arizona Street).

Tickets are $15 for each performance, and there are other Receptions and VIP options available as well on their web site HERE. You can buy tickets in advance at Ace Hardware, the Boulder Dam Hotel, and the Chamber of Commerce.

Here’s a summary of the two performances from their web site:

Coleman, popularly known as “Queen Bess,” was the first black woman to become an airplane pilot, and the first American woman to hold an international pilot’s license. While many people know about early aviator Amelia Earhart, Coleman, who got her pilot’s license before Earhart, is little known. Growing up in the cruel world of Jim Crow laws and discrimination, Coleman vowed to amount to something in life. She became an avid reader and a good math student. She was determined to get ahead, and show the way to others handicapped by racism, poverty and ignorance.

Portrayed by Chautauqua Scholar Doug Mishler, Jacques Cousteau was born on June 11, 1910, in Saint-André-de-Cubzac (Gironde) in France. He entered the naval academy in 1930, was graduated and became a gunnery officer. Then, while he was training to be a pilot, a serious car accident ended his aviation career. So it was the ocean that would win this adventurer’s soul. In 1936, near the port of Toulon, he went swimming underwater with goggles. It was a breath-taking revelation. Seeking a way to explore underwater longer and more freely, he developed, with engineer Emile Gagnan, the Self-Contained Underwater Breathing Apparatus, or scuba, in 1943, and the world under the sea was opened up to human beings. After World War II, Cousteau, along with naval officer Philippe Tailliez and diver Frédéric Dumas, became known as the ” mousquemers ” (” musketeers of the sea “) as they carried out diving experiments in the sea and laboratory.

Remember how Chilly Jilly's first started? In that tiny little location across … END_OF_DOCUMENT_TOKEN_TO_BE_REPLACED

In an effort to help folks who may not feel safe venturing to the grocery store, … END_OF_DOCUMENT_TOKEN_TO_BE_REPLACED

We are celebrating Mother's Day and showcasing lots of items for gifts. Purses, … END_OF_DOCUMENT_TOKEN_TO_BE_REPLACED