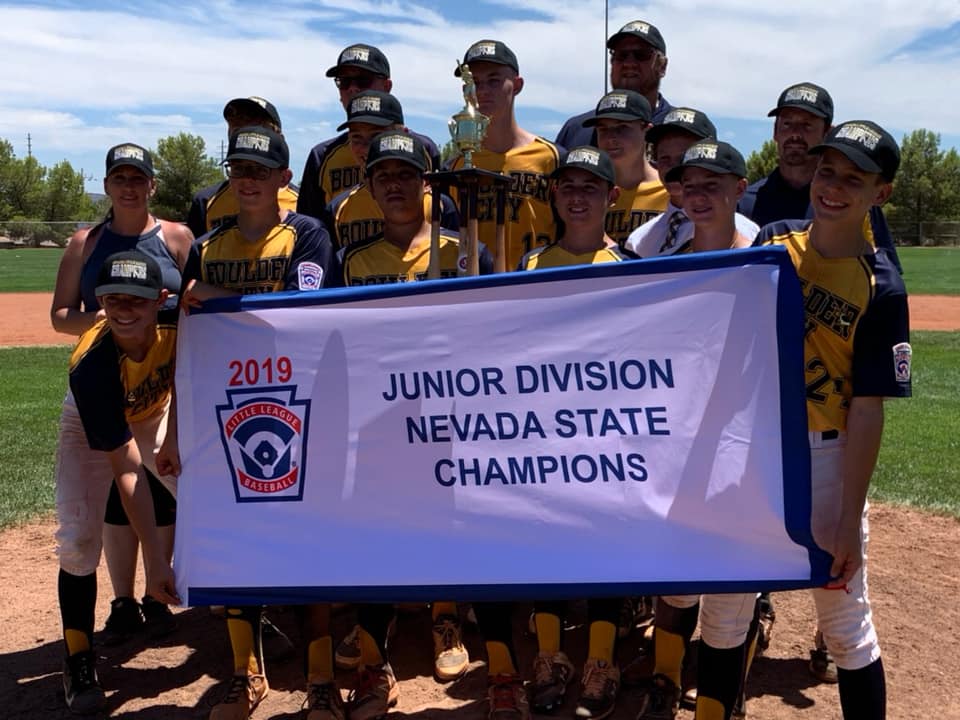 Come on now – sing it with us…”We are the champions, WE ARE THE CHAMPIONS…”

This means they advance to the next level which is the Junior Western Regional tournament in San Jose, California. Play starts this Friday, and they apparently need some funds to help them get there. They’ve set up a Go Fund Me campaign to help with that HERE, and they really do need the help pulling those funds together – they have just 72 hours to raise that cash!

According to Katie Kilar, the President of the BCLL, “This is the second time in three years that Boulder City will represent the state of Nevada at the Junior Western Regionals in San Jose. Their competition includes teams from Alaska, Hawaii, Washington, Oregon, Idaho, Wyoming, Utah, Arizona and California. This group of thirteen boys have competed hard to earn this honor and it will be the summer of their lives.”

According to their Coach, Clint Spencer, “that win yesterday was epic, I think it took a couple of years off my life! I’ve coached since 2002 and never seen a game like this – it was like a tennis match, the lead changed 4 or 5 times, but they never gave up.” He said even though they were undefeated in the tournament, they lost the coin toss, and so they were the visiting team. But that didn’t stop them ever – they just played their best and managed to clinch the game right before they ran out of pitching.

We wish them the best of luck!

This Thursday, July 16th at 6pm, get a little online retail therapy with Bloom's … END_OF_DOCUMENT_TOKEN_TO_BE_REPLACED

Volunteer's are the heart of Lend A Hand! Did you know that driving for Lend … END_OF_DOCUMENT_TOKEN_TO_BE_REPLACED