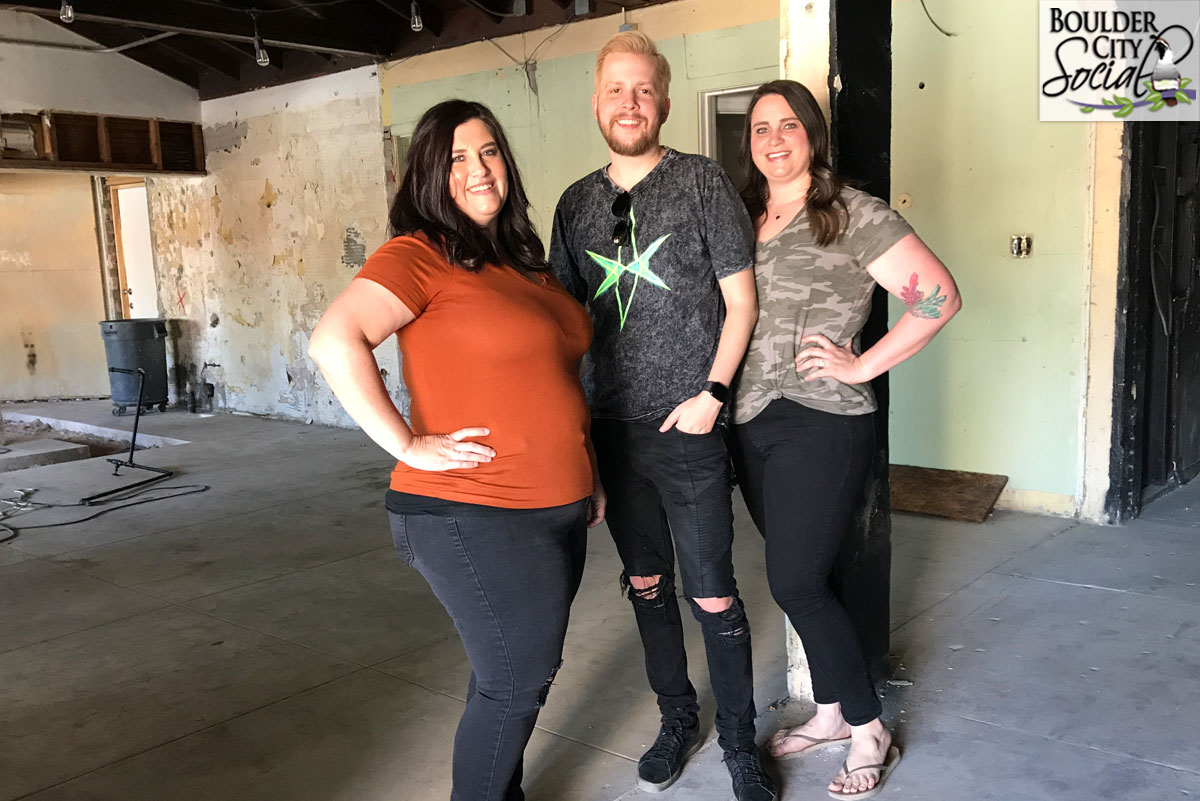 We’re thrilled to share that both portions of the Browder Building at 552 Nevada Way are leased. And even better, work is going to begin on both locations soon!

Meet these three above, Co-Owners Misty Magruder, Travis Wallgren and Amber Stephens (left to right, above) of what will soon be known as the Dam Roast House & Browder Bookstore!

The owners of the Browder Building, Dan and Kelly Fox, you know purchased this building a little over a year ago, and split it into two portions, this side being the former Mel’s Diner location, along with one other sliver of the building that was opened up and added onto the space. Now, the plan is to take that side (the portion in black below) and this will be the coffee and food bar. Then, there will be an open seating and lounging area, and as you move further into the old dining area of Mel’s this becomes a book store, again with room for casual seating.

They plan to offer healthy food options that have been hard to come by in town, such as gluten-free, organic and vegan items, as well as some fun treats, like a waffle stick for kids (or me, thanks very much!), ice cream and other gourmet-style goodies. For the coffee menu they plan to make high-end espresso, cappuccino and other delights featuring the Colorado River Coffee Roasters.

Think young, cool, millennial and fun! But also a place that gives a nod to the history of the building as well. If you didn’t know it, Ida Browder started a collection of books that became the seed of the first Boulder City Library – so that’s where the idea of having a bookstore came from! Not to mention, we have around two-dozen local authors in town that really have no where locally to show and sell their work.

But let’s back up and talk about these three young dynamos up above, shall we? First off, Travis and Amber are both BCHS graduates from ’07 and ’09, respectively, which is of course how these two know each other. Misty and Amber both currently work at Albertson’s and bonded not only as working partners, but as new mom’s learning the ropes – apparently Misty is the mom of all!

Here’s one other detail I’d like you to know as well – I can honestly say that these two gals Misty and Amber have been working on this project and have had their business plan mapped out for years. Jill Lagan, CEO of the Chamber of Commerce in town has been watching and working with them to help find a location for their dream coffee shop that pre-dates our beloved and more recently opened Boulder City Company Store.

Travis joined the team a little later, when they were visiting over a weekend, and they showed him their business plan, and he jumped at the chance to join them!

All three owners say they will work hard to differentiate their coffee and food options from the other spot, so the goal is to be sure they can co-exist and each offer something unique. Amber and Misty say they had looked at the former Scoops location when that become available (near Toto’s in the 99 Cent Store lot) but that didn’t happen. Then there were a few other attempts at a location that also fell through over the years. But Amber constantly looked at Browder and thought, ‘wouldn’t Mel’s old spot be perfect!’, and now it’s a reality!

Currently, they are making plans for architecture and design and working with the City to begin the processes of going before the Historic Preservation Committee as well as the RDA grant application. Tentatively, they hope to open in the fall of this year. We can’t wait to see how things progress and wish them the best of luck in this process!

November is full of in-store deals for you at the Beauty Kitchen, located at 501 … END_OF_DOCUMENT_TOKEN_TO_BE_REPLACED

It is Spanish Heritage Month which celebrates the cultures of Latin America. … END_OF_DOCUMENT_TOKEN_TO_BE_REPLACED

Here's your line-up for this month at the Brew Pub! Nothing better on these … END_OF_DOCUMENT_TOKEN_TO_BE_REPLACED