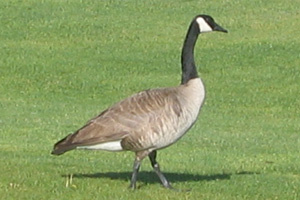 Yup…taken right outside my backyard fence, which is on the Municipal Golf Course.

There were actually two pairs of them and they weren’t even remotely intimidated by the golfers trying to complete the 7th hole. In fact — they were a little more than curious about those “little white eggs” the golfers were trying to drop into that hole…it was a riot (well, for me…not for the golfers).

Being the first time I’d really seen them up close – I Googled them to find out where they were coming from (since their name indicates where they’re heading to)…so for those interested, here’s what we now know (courtesy of Wikipedia):

And now we have concluded our lesson in Ornithology…oh wait, that was probably the last lesson…what the heck we call the study of birds!

America's First Responders are essential workers during this pandemic and … END_OF_DOCUMENT_TOKEN_TO_BE_REPLACED

Beginning this weekend, every Friday and Saturday night from 5pm-9pm you can … END_OF_DOCUMENT_TOKEN_TO_BE_REPLACED