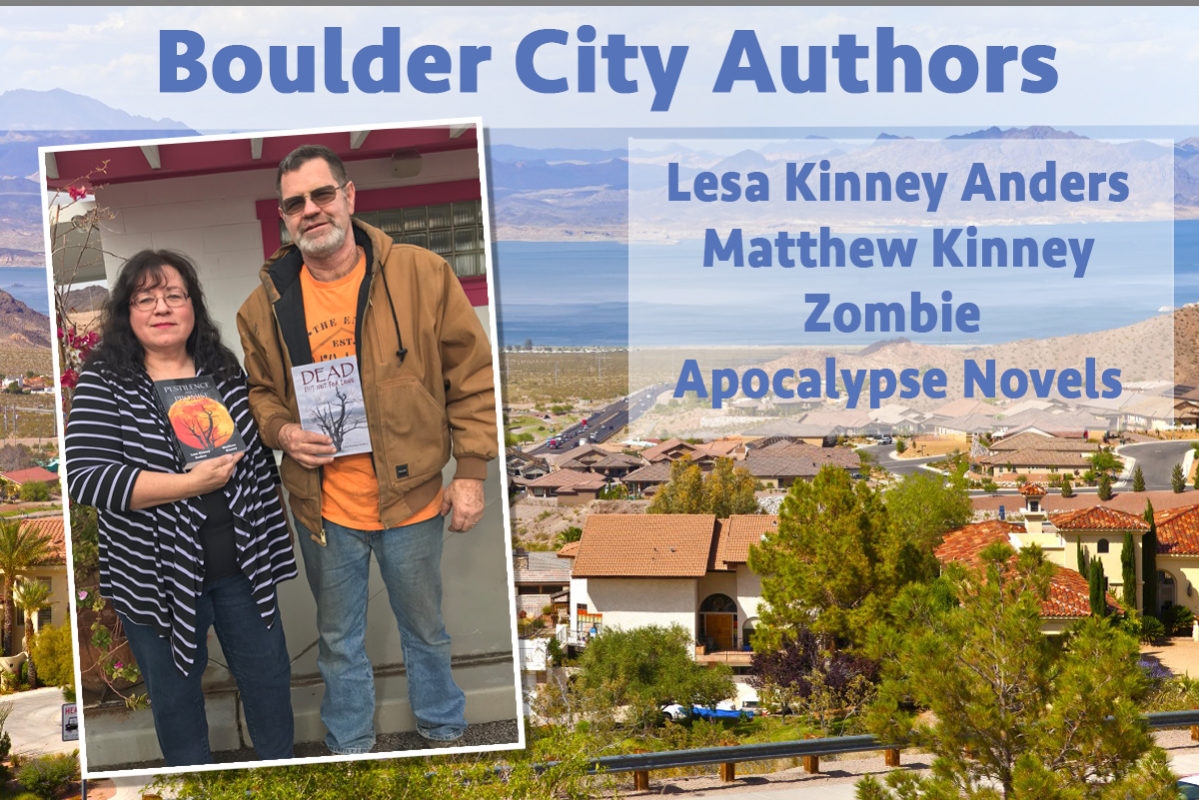 In this next installment of our Local Authors Series we’re talking to a brother/sister team – Lesa Kinney Anders and Matthew Kinney. In case you’ve missed what we’re up to here, we’ve learned that there are nearly two dozen authors locally here in town. But, there doesn’t really seem to be a way to easily find the books they’ve written or any local source for them to promote their work. We created this series to share the authors stories and to let all of you – perspective readers – get to hear about their works. (If you’ve missed our previous columns, we’ve got links for you at the bottom of this page.)

Matthew Kinney: I was born in Michigan (they tell me I was born there… I really don’t remember) and spent my early childhood in New York and Virginia. When I was eight years old my family moved out west. I eventually caught up with them and made them promise to never do that again. I’m now married and have a son, three dogs and four cats. When I’m not meandering through the US in my semi, [truck driver] I split my time between Cedar City and Boulder City. I enjoy writing, listening to audio books while I drive, and working on my land.

Lesa Kinney Anders: I was born in central Michigan and was later dragged by my parents to Nevada, where I still live with my husband and the youngest of our four children. I’ve also lived in New York, Virginia and Colorado. I have been writing for years and have several mostly-finished manuscripts tucked safely away on my computer. I enjoy reading, drawing, photography, camping, traveling and martial arts. I also have a black belt in Taekwondo.

Lesa: Matt and I started a text-based zombie apocalypse role play game to work on our writing skills. We each had several characters and posted in two or three different threads (or storylines) at a time. There was no plan in the beginning—we just reacted to each other’s posts—but a story began to develop. Eventually, we began toying with the idea of turning our work into a novel. That was no easy task, since it not only involved blending both of our writing together but also meant combining all of the storylines into one work.

As far as the zombies go, our brother, John Kinney, was the one who got us interested several years ago.

The “Dead, but Not for Long” series was written to entertain, and we hope our readers get some enjoyment out of it. We did a lot of research during the process, so if readers learn something new (as we did) or if the book makes them think about how they’d handle a disaster situation, then that’s a bonus.

We self-published the first book in 2012 through Amazon. We were approached by a publisher after the book began to do well, but we decided not to go that route at this point in time.

Lesa: I’ve always loved to read, and I began writing as a teenager. When our father passed away in 2002, I found that writing helped me to deal with my grief. I still haven’t published the book I was working on during that time (Sylvanglen) but I hope to do that soon.

Matt: Ever since I was a child I have had this amazing superpower to transport my mind to other places without the help of psychedelic drugs. Yes, I was the kid in school who stared out the window with his finger up his nose, drooling while the teacher tried to get his attention and the rest of the students laughed. College was a tough time for me. I soon realized that If I transposed these thoughts onto paper, people would laugh at my characters instead of me and my therapy bill would be cut in half.

Lesa: I was an English major at UNLV before I switched to accounting. My mother and I also took a writing class together here in Boulder City several years ago. My advice to other writers is to write every day. It takes practice, patience, and a lot of work. Don’t expect your first attempts to be great, but just keep at it. Look back after a year of writing and you should see substantial growth. Ask for criticism and learn to accept it or you’ll never grow as a writer. Constructive criticism is one of the greatest (and most difficult) tools you can have.

Matt: Language Arts was always my favorite subject in school, and while other students dreaded the essay question, I thrived on it. This made me terrible at times-tables, and Mrs. Adams had to constantly remind me that five times seven was not an essay question. I had no formal training in writing but have been blessed to have grown up in a family of aspiring writers. My older sister, Lesa, when she wasn’t dislocating my shoulder or forcing her latest experimental potion down my throat, was a great mentor and a source of sound information, which helped me overcome my lack of formal training.

Something I hear often when discussing my books with others is, “I’ve got this story inside and I just need someone to write it for me.” While it’s good to be able to have a mentor, unless you are independently wealthy nobody is going to write your story but you. I’ve found writing to be 10 percent creativity and 90 percent discipline. If you truly want your stories to be shared and appreciated by strangers, there is a wealth of information in cyberspace that will point you toward your goal. It will take vast amounts of dedication and perseverance, but when you hear complete strangers half a world away say that the story you pulled from your brain and organized into words made them laugh or cry, or even made a few hours of their life a little more enjoyable, it will be worth it.

Lesa: Our family moved to Boulder City in 1974. Matt and I each moved away for a couple years after high school – Colorado for me, Oregon for him. Matt now spends most of his time in Cedar City, though he still has a house in Boulder City.

What I like best about Boulder City is the small-town atmosphere. My husband and I raised four children here, and it will always be home to us no matter where we are. I love the downtown area and dining outside at Milo’s and Tony’s when the weather is nice. My husband and I enjoy taking walks by the ponds at Veteran’s Memorial Park, and then there’s Trivia Night at the Boulder Dam Brewery.

Lesa: While Matt and I both love writing, we also both have regular jobs that pay the bills. I’ve been the controller at Rocky Research here in town for 32 years. Matt recently left his long-time job as a mason to buy a trucking company, which keeps him ridiculously busy. We have the third book in our series planned and started, but it’s moving slowly due to our day jobs. Someday, we both hope to write full time.

We hope you’ve enjoyed this visit with Lesa and Matthew! If you’ve missed either of our other interviews in this series you can see both of these authors stories here:

America's First Responders are essential workers during this pandemic and … END_OF_DOCUMENT_TOKEN_TO_BE_REPLACED

Beginning this weekend, every Friday and Saturday night from 5pm-9pm you can … END_OF_DOCUMENT_TOKEN_TO_BE_REPLACED