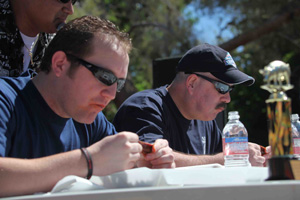 It’s a throw-down between the Boulder City Police Department and the Boulder City Firefighters…and who’s sponsoring it? You know it — US!!! We are the official sponsor of the 2nd Annual Best Dam Rib-Eating Contest between our very own Police and Fire Departments – woo hoo!

Last year’s inaugural contest was a huge success and in display of sheer will (and probably some serious indigestion), the Fire Department was declared the ultimate victor. The trophy was theirs to keep on display at the fire house and they’ll be back this year to defend their title. The contest is currently scheduled for 2pm (or thereabouts) on Saturday, May 28th at the 7th Annual Best Dam Barbecue Challenge in Bicentennial Park…see you there!

America's First Responders are essential workers during this pandemic and … END_OF_DOCUMENT_TOKEN_TO_BE_REPLACED

Beginning this weekend, every Friday and Saturday night from 5pm-9pm you can … END_OF_DOCUMENT_TOKEN_TO_BE_REPLACED