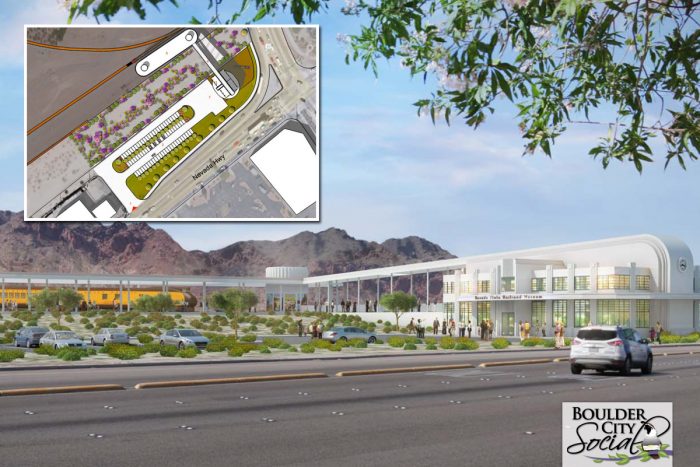 How many times have you heard that something cool should be built on the corner of Nevada Way & Buchanan that is diagonally across from CVS because it’s not the MOST attractive corner at Boulder City’s main intersection?  Well, how’s about this … the new and improved Nevada State Railroad Museum and Train Depot, for which we have renderings for ya today!

Here’s the skinny and it relates to the Interstate 11 project because one component of that project is a railroad bridge that will be built over the interstate highway enabling Boulder City’s existing train operation to travel all the way into Henderson (with platforms  planned at Van Wagenen St. and behind the Fiesta Casino, btw).  Great opportunity to reconnect (for the first time in decades) the Henderson and Boulder City communities.

With this opportunity to increase tourism – the Nevada Railroad Museum and the Boulder City Economic Vitality Commission (aka ‘EVC’, which is overseen by the Chamber of Commerce, FYI) have been working on a large-scale project to relocate and substantially upgrade the current train museum and visitor center with on-site expansions such as an expanded Museum & Visitor Center, Train Display Pavilion and Equipment Display Hall.

In addition to the “Museum Campus” part of the project, the EVC is also working on a separate, but related project called the “Linear Park and Associated Trail System” that will feature bicycle and pedestrian trails that connect the existing River Mountain Loop (adding much-needed restrooms for bikers and hikers), Sidewalks with interpretive signs about the train’s role in the construction of Hoover Dam and the history of Boulder City, a train-themed Public/Neighborhood Park, a Small Outdoor Children’s Learning Element, and more.

The financial responsibility for the new and improved Railroad Museum and Campus would be the responsibility of the State of Nevada and preliminary drawings and cost estimates are due in the next 2-3 months so that they can be taken to the state legislation to try to get funding to build.

The cost for the Linear Park and associated off-site improvements is approximately $4.7 million and would be a local responsibility, so the EVC has four different grants in the works to provide the funding so that Boulder City taxpayers aren’t footing the bill.

The rendering for the Museum Campus is in the photo above and below is an overhead site plan with a legend of what elements are where for you to enjoy while all this is in the works.  We’ll keep ya posted! 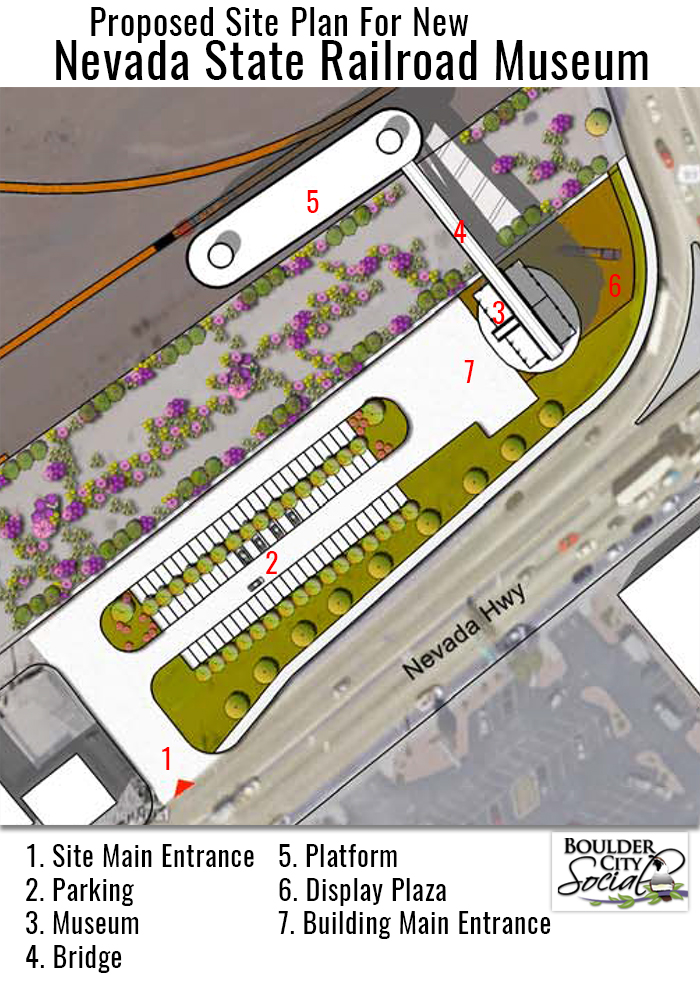 Valentine's Day will be here before you know it...are you listening … END_OF_DOCUMENT_TOKEN_TO_BE_REPLACED

If you have an estate, and want to know the rules, regulations and tax benefits … END_OF_DOCUMENT_TOKEN_TO_BE_REPLACED

Come in and get the Fudge of the Month for January - which is Chocolate Mint. … END_OF_DOCUMENT_TOKEN_TO_BE_REPLACED

This month's specials at the Bighorn Cafe: Salisbury Burger with all the … END_OF_DOCUMENT_TOKEN_TO_BE_REPLACED

For the month of January, you can join Snap Fitness for just .20 cents! That's … END_OF_DOCUMENT_TOKEN_TO_BE_REPLACED