You are here: Home / Town Happenings / A Visit to the Boulder City Municipal Airport 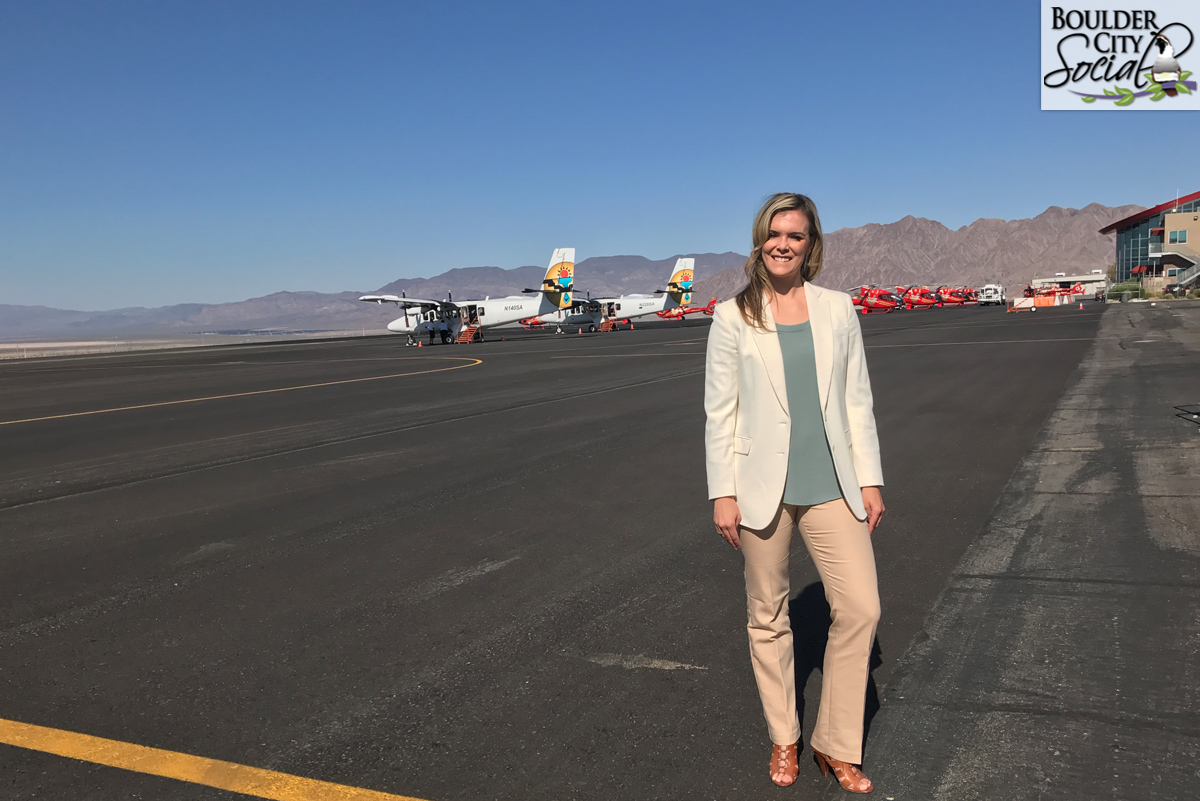 We recently had the pleasure of meeting Jennifer Lopez, Airport Manager out at the Boulder City Municipal Airport, and got a quick tour of the facilities there.

In case you didn’t know – this is one busy place!

They have 128 hangers (12 of which came over from the now abandoned airport on Boulder City Parkway) and 30 outdoor tie down areas, all of which are rented, she says.

They have several different independent companies and organizations who operate out of Boulder City: Papillon, Serenity, and 5 Star Helicopter tour companies who give regular tours to the Grand Canyon, along with Skydive Las Vegas, Grand Canyon Airlines and also the Army Corps of Engineers have a base there as well.

That’s a whole lot of flying around in what is still uncontrolled airspace! But what exactly does that mean?

The BC Municipal Airport doesn’t currently have an air control tower – so with no overriding supervision in the sky, that means it’s not controlled by all of the specific FAA regulations that come with it.

There are both benefits and challenges that come with that.

Technically the airport is now busy enough to warrant the construction of an aircraft control tower. Ms. Lopez, who is a pilot herself, says the community down there is very split on their opinions regarding if they should, or should not construct a tower.

There are a great many professional pilots who fly for commercial airlines who also have their own planes there – and they really love the freedom of being able to come and go with ease, without all the additional FAA regulations.

But there are also valid safety concerns with the mix of aircraft, the regular heavy volume of tour traffic, not to mention skydivers all operating in the same airspace.

There are a lot of interesting times to come on this issue, and we thank Ms. Lopez so much for sharing this with us. We’ll keep you posted as things evolve out there!

Remember how Chilly Jilly's first started? In that tiny little location across … END_OF_DOCUMENT_TOKEN_TO_BE_REPLACED

In an effort to help folks who may not feel safe venturing to the grocery store, … END_OF_DOCUMENT_TOKEN_TO_BE_REPLACED

We are celebrating Mother's Day and showcasing lots of items for gifts. Purses, … END_OF_DOCUMENT_TOKEN_TO_BE_REPLACED