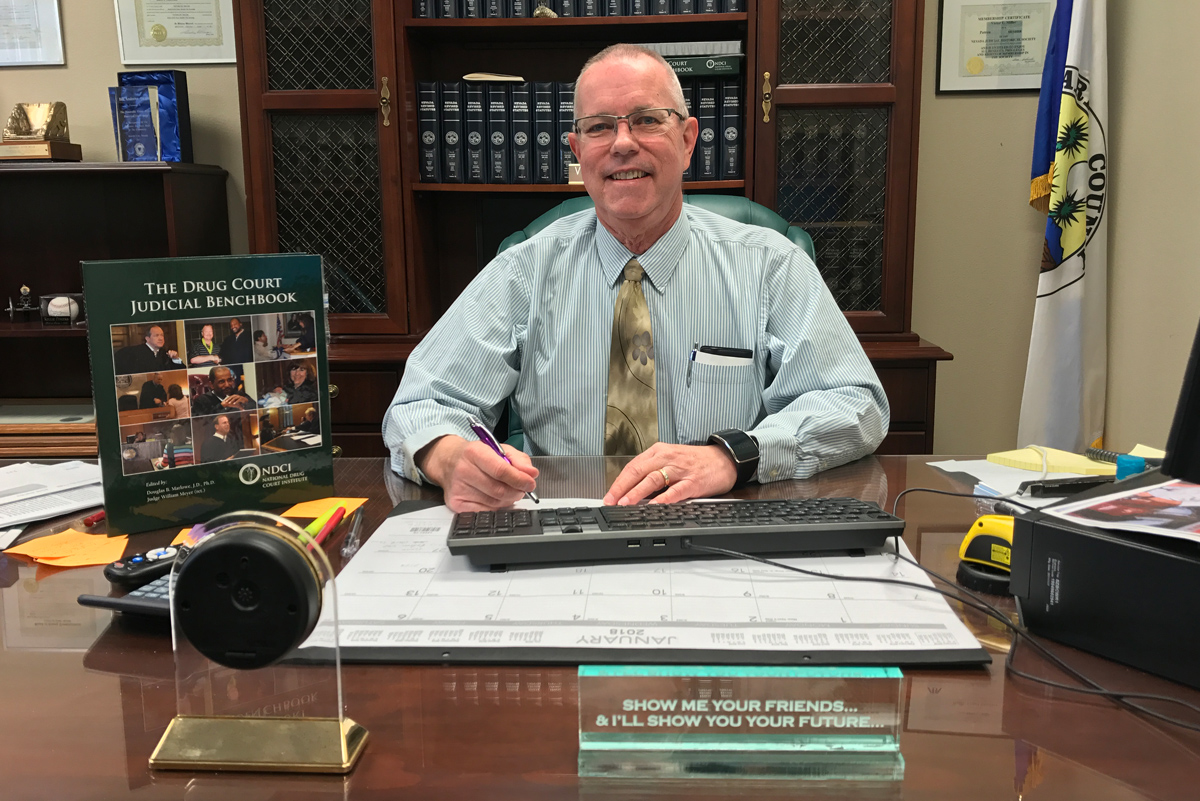 Last week, we were thrilled to sit down with Judge Victor Miller to speak with him about a program we recently learned about – Boulder City’s “Breaking the Cycle” Drug Court Program.

If you haven’t heard about it, you’re not alone. But this program is quietly working to change the lives of those whose addictions have landed them on the wrong side of the law, often having been in the legal system for a number of years, but now through this program can break the cycle of their additions, and the choices they’ve made because of that.

First, a bit of history:

The Boulder City program is based in part on the Las Vegas program started by Judge Jack Lehman, only the third one in the nation. They’ve got quite a track record you can read about from the RJ HERE.

Now, the National Drug Court Institute sets national standards and best practices, as well as provides training everywhere in the US.

The Drug Courts and their participants are the most scientifically studied in the entire judicial system. Meaning there’s a lot of data that this works, saving lives as well as money.

Judge Miller was frustrated by what he saw locally as a cycle of addiction-related crimes, and feeling like the system was nothing more than a revolving door – addicts commit crimes to support their addictions. They go to jail. They get out. But their addiction remains and on it goes…so he knew about this program and wanted to start one, but that requires resources.

Then one day, Doug Scheppmann walked into Judge Miller’s door, and along with the support of Boulder City Sunrise Rotary, the program began here in 2014.

There are a number of qualifications that have to be met by the participants before they are approved: they are addicts who want help, are non-violent criminals, and don’t have other extenuating issues (such as severe mental health problems).

But once qualified, a participant becomes part of an entire support team to help them to first kick their addiction, but secondly and more importantly, to learn basic life skills. It’s this second part that’s the hardest.

Judge Miller says, “By the time they reach us, an addict has hit rock bottom. They’ve burned bridges and therefore don’t have a support system around them anymore. Through this team approach we try to fill that void, and create that support network.”

Each participant literally has a team around them: Judge Miller, a social worker, a psychologist, counselor, a case manager, a Marshall providing monitoring (gps, drug monitoring), a police officer, as well as a prosecutor and defense attorney.

The average length of time that each participant spends active in the program is 18-24 months.

To date, the court has ‘graduated’ 8 people, and there’s a commencement ceremony when they complete the process.

Currently there are 17 participants, and there will be another commencement ceremony on April 17th.

One big success factor locally has been the participation of local small business owners who are willing to help mentor, support and hire locals in the program. Also involved is the new One Stop Career Center to help with job counseling and other employment related training and skills.

Judge Miller emphasizes that all are welcome at the Drug Court hearings, every other Tuesday evening at 5pm, (March 6th is the next one), as well as at the next commencement.

Well, folks, we learn something... END_OF_DOCUMENT_TOKEN_TO_BE_REPLACED

We recently had a lovely... END_OF_DOCUMENT_TOKEN_TO_BE_REPLACED

No doubt you’ve heard – or... END_OF_DOCUMENT_TOKEN_TO_BE_REPLACED

With Father’s Day just around the corner, Toto’s Mexican Restaurant is... END_OF_DOCUMENT_TOKEN_TO_BE_REPLACED

Hello, I am excited to start my journey here at Jack and the Beanstalk! My name is... END_OF_DOCUMENT_TOKEN_TO_BE_REPLACED

The Dam Roast House is inviting you to have coffee with your Congresswoman Susie... END_OF_DOCUMENT_TOKEN_TO_BE_REPLACED