You are here: Home / Town Happenings / Fact Finding Mission: Why Boulder City Has Only One Grocery Store

Fact Finding Mission: Why Boulder City Has Only One Grocery Store 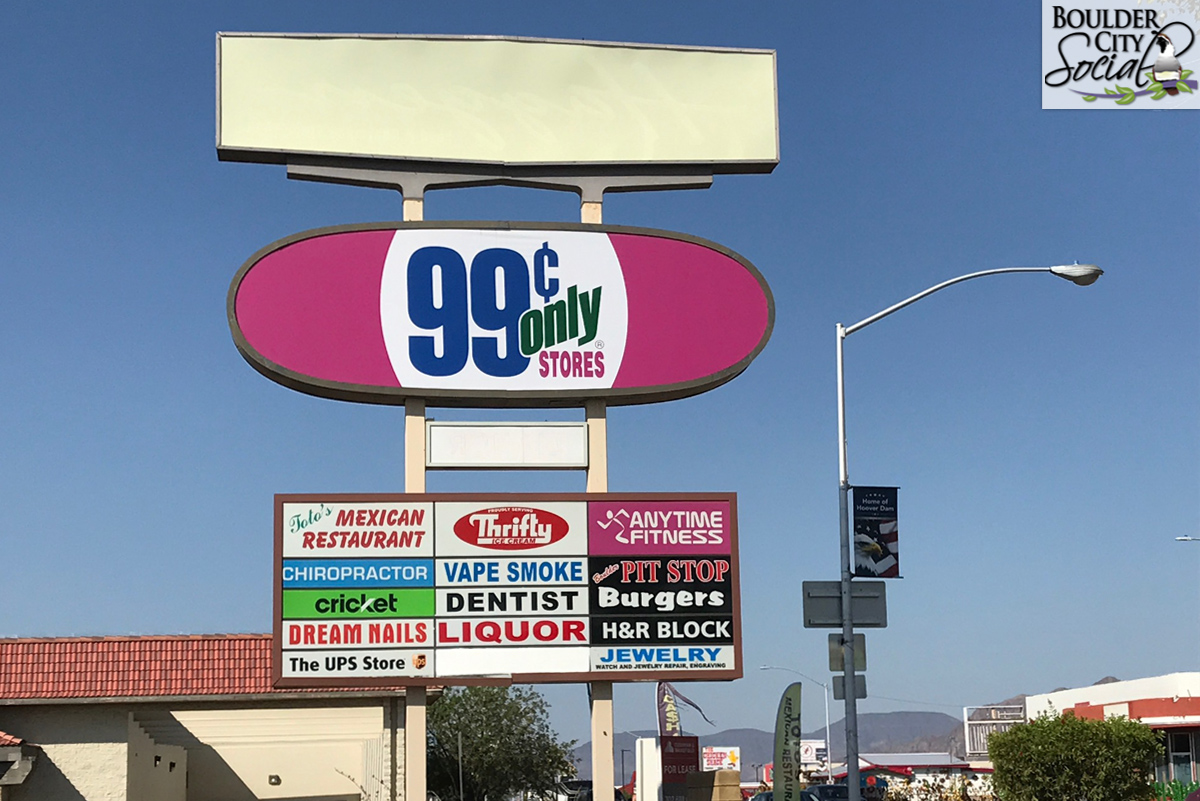 One of the consistent pain points we hear in our community is the lament of the fact that we are a town of over 15,000 with only one local grocer to shop from. It’s not ideal. But how did we get here?

The answer? It’s complicated. There seems to be a lot of miss-information on the subject, so we decided to do some digging and ask some questions and we’re going to share with you what we’ve learned.

First – A History Lesson in the Ownership of Vons Grocery

We checked the Clark County Assessor website and have a screen shot below to share with you: 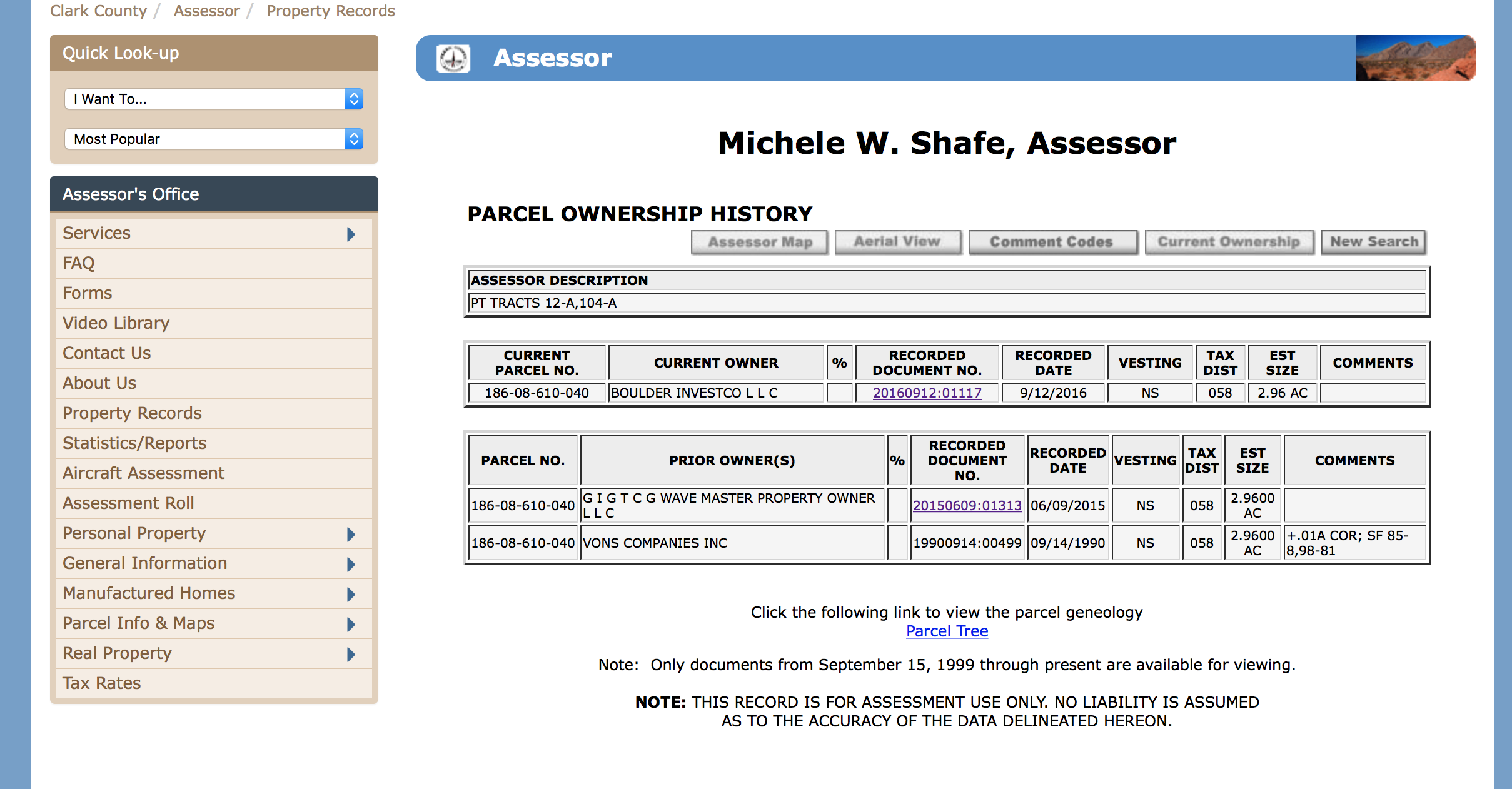 As you see, Vons is the original owner of this building at 1031 Boulder City Parkway since 1990 on their online records. (Note, actual ownership period may be longer, this is only what is available online.)

We see in June of 2015 a new owner who takes over after Vons has to sell the building in the terms of the Albertsons and Vons/Safeway merger. This was ordered by the courts in 166 locations in 4 states due to the proximity and overlap of too many Albertsons and Vons stores being too close together. They had to sell, and another grocer was to come in.

And as we know in Boulder City, that grocer was Haggen’s, and unfortunately that corporation was in over their heads. Sadly within a year, they closed their new CA and NV locations and filed for Chapter 11 Bankruptcy.

So…back to our parcel history above…this is where you see the Wave Master Property Company first purchase that location in June, 2015. They purchased a number of these Haggen stores, in CA and NV. We see records of them being named as creditors in the Bankruptcy filing mentioned above, and then not surprisingly, they found a buyer in September 2016.

Now It Gets Interesting

Boulder Investco, LLC acquires the former Vons/Haggen location, listed as C/O Garrrison Investment Group, who (according to their web site) specialize in purchasing distressed commercial assets. We’ve always heard however that Safeway/Albertsons  Co. in fact owned this location. They do, and we have proof of that below.

Via the SEC Filing of Safeway, Inc. on the link HERE, we have verified that Boulder Investco, LLC is indeed a subsidiary of the larger Safeway, Inc. and Albertsons subsidiaries. Check the bottom of page 4 and you’ll see them listed there.

So, this stands to reason then that the Albertsons/Safeway Company isn’t inclined to see this retail location to fall into the hands of a competing grocer, such as Smith’s/Kroger or Trader Joes, for example.

The Rest of the Story

We’ve often been part of discussions around town about why The City couldn’t find another grocer or other retailer to go into that spot. But it is indeed, complicated, and we’ve asked the same questions. So we reached out to Jill Lagan, CEO of the Chamber of Commerce and asked her about that.

Jill told us that in the wake of the Haggen’s closure The City and herself made constant inquires to some 30 different grocer chains, looking for a partner to come into that retail space. What she said was this: none of them but 1 was even interested when they spoke to them about going into that existing space! ONLY ONE. And unfortunately that deal died right as the property changed hands from the Wave Master Property Company to the Boulder Investco, LLC.

According to Jill, “we’ve driven prospective grocers, as well as other retailers, all over this town, and none of them wanted that existing space. Retailing has changed since that older model store was built. Grocers have different footprints now, need more energy efficient buildings, and would rather build new than invest in the expense that would be needed to remodel that older store.”

We’re glad we asked, and it gave us a completely different perspective from what we might assume. So what about a new grocer or retail store location? We’ll have to see. The other harsh truth here is that with the uncertainties being created by I-11, most companies have adopted a ‘wait and see’ position when it comes to Boulder City.

The Economic Vitality Commission and The City will continue to search out opportunities for a grocery store, and there are current conversations continuing now.

We hope this has been a helpful, factual explanation of this situation – we sure learned a lot and hope you did too!

Well, folks, we learn something... END_OF_DOCUMENT_TOKEN_TO_BE_REPLACED

We recently had a lovely... END_OF_DOCUMENT_TOKEN_TO_BE_REPLACED

No doubt you’ve heard – or... END_OF_DOCUMENT_TOKEN_TO_BE_REPLACED

With Father’s Day just around the corner, Toto’s Mexican Restaurant is... END_OF_DOCUMENT_TOKEN_TO_BE_REPLACED

Hello, I am excited to start my journey here at Jack and the Beanstalk! My name is... END_OF_DOCUMENT_TOKEN_TO_BE_REPLACED

The Dam Roast House is inviting you to have coffee with your Congresswoman Susie... END_OF_DOCUMENT_TOKEN_TO_BE_REPLACED