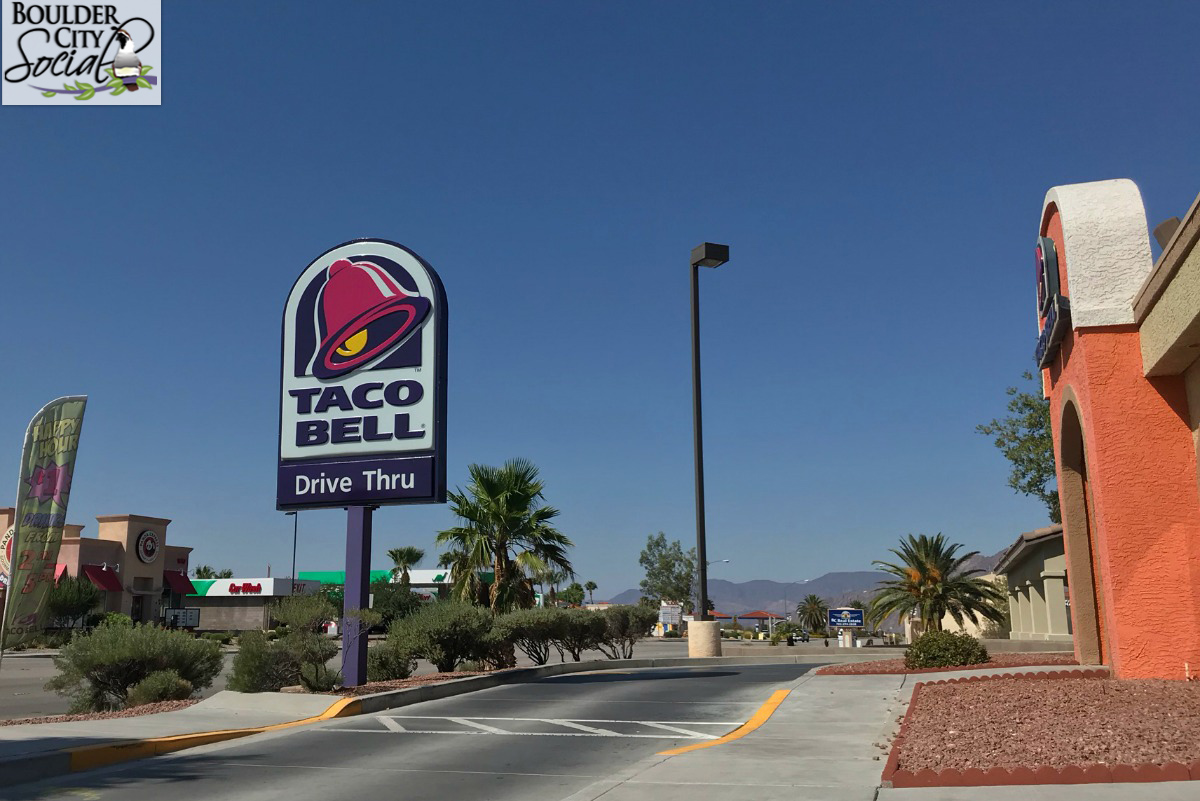 We’ve heard a persistent rumor out there, that Taco Bell would not be renewing their lease/and or was closing. Quite a while ago, we had heard to the contrary, that they were staying and thought the rumor had died. But then just a few weeks ago, we were having coffee with a friend who insisted that they knew they were not staying here. So…we decided to get to the bottom of this.

Not only is Taco Bell planning to stay in Boulder City, they have recently just renewed their lease and are planning to remodel the store!

So…obviously this is indeed great news! We spoke to both the Restaurant General Manager, Mona Coster as well as her District Manager, Ron Rowe to confirm this information.

Ron told us that they are gradually updating and remodeling most of the stores they have in the greater Las Vegas area, and that Boulder City was definitely on the list. He and Mona also both emphasized they were excited for the planned beautification project for Boulder City Parkway.

Both also sadly expressed their dismay at these persistent rumors. They were not at all surprised when I shared that I had recently heard them, and say that this incorrect information has impacted their ability to hire employees! Ron says that they had posted on the BC Neighborhood Connection at one point that they were not leaving town – but the rumors stayed.

As to the recent opening of Interstate 11 and the drop in car traffic, Mona says they have seen a slight dip in sales, but they remain very optimistic for the long term. Mona, who has been at the store for the past three months, says she has been working to continue to improve their service and quality, and they have had good sales numbers overall, reflecting those efforts.

We’re hoping that this settles this issue, and that we as locals know that they want and need our support. So, every once in a while, let’s make sure we all ‘make a run for the border!’ and support all our businesses as much as we can.

Well, folks, we learn something... END_OF_DOCUMENT_TOKEN_TO_BE_REPLACED

We recently had a lovely... END_OF_DOCUMENT_TOKEN_TO_BE_REPLACED

No doubt you’ve heard – or... END_OF_DOCUMENT_TOKEN_TO_BE_REPLACED

With Father’s Day just around the corner, Toto’s Mexican Restaurant is... END_OF_DOCUMENT_TOKEN_TO_BE_REPLACED

Hello, I am excited to start my journey here at Jack and the Beanstalk! My name is... END_OF_DOCUMENT_TOKEN_TO_BE_REPLACED

The Dam Roast House is inviting you to have coffee with your Congresswoman Susie... END_OF_DOCUMENT_TOKEN_TO_BE_REPLACED