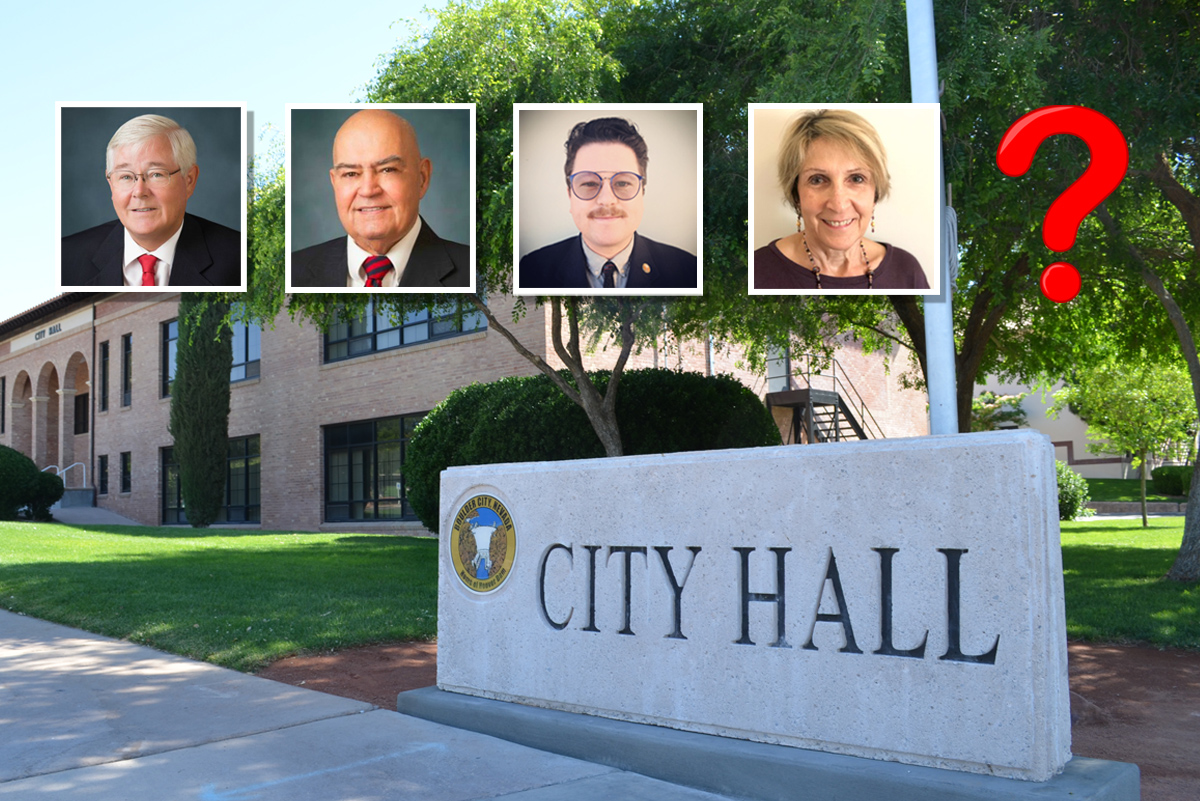 UPDATE: The new City Council voted 3-1 in favor of filling the vacant seat by appointment, Warren Harhay was the dissenting vote. The new Council also voted to fill only the appointment of Mayor Pro Tem for now, and that was decided for James Howard Adams.

Tonight will be the official swearing in of Boulder City’s new Mayor, Kiernan McManus and the two new City Council members, James Howard Adams and Claudia Bridges. Congratulations to them, and we look forward to seeing them settle into their new roles and wish them all the best of success!

There has been much debate on how the vacant seat of McManus will be filled. What we have seen on social media has been at times inspiring, and at others frankly hard to watch as rampant speculation and back-biting has sometimes become rather mean-spirited. But there is no escaping the topic, so we tried our best to get the facts on how this process will be handled.

Tonight, item #8 on the Agenda says the following – For possible action: Discussion and possible staff directive regarding the selection process for a Council member to fill the unexpired term of Council member McManus.

What this means is that the Council will possibly instruct the City staff to prepare for the following:

One logical thought is that they will attempt to fill the seat themselves by an agreed upon appointment, as Special Elections are expensive, estimated costs on this are $30,000, according to City Communications Manager, Lisa LaPlante.

However, no one knows and the Council can direct as they please. If they decide to appoint, they will inform staff of how the selection process will proceed. An appointed candidate needs to win only a majority vote of the four seated Council members. If they are unable to reach a winning candidate, then we’re told the winner will be chosen by lot.

The clock is ticking on this – they have 30 days or after three regular or special meetings to make this choice – whichever time frame is shorter.

So…we’ll all watch and see what they decide, and how they wish to proceed. We live in a representative democracy – that’s how this works. We elect people to represent our interests who reflect our values and intentions, and then let them go do their job. Now they will – and we look forward to what we hope will be a constructive process that will help create a good future for Boulder City.

And for those of you who really pay attention to these things, we’d be remiss if we didn’t address some other important stuff that may also be decided tonight: Agenda item #10: the City Council appointments.

If you’ve never noticed, all of our City Council members also represent Boulder City on a whole bunch of other groups, commissions and frankly a dizzying assortment of boards and meetings. Some of these make our eyes glaze over, but most of it really matters – notably the Las Vegas Convention and Visitors Authority (LVCVA), among others. Here is the full list of all of these that MAY ALSO BE decided tonight, along with some background on each:

Boulder City Community Education Advisory Board: Meets on a quarterly basis. The term of office is two years. The City has two positions on the Board; the City Manager or his/her designee and one member of the City Council. Council member Shuman has served as the City’s representative for the past four years.

Civilian Military Council Executive Board: Meets quarterly, the second Tuesday of the month at 12 p.m. This Council was established to open lines of communication between local governments and Nellis Air Force Base. This is the Mayor’s position, and there is no defined term of office. If the Mayor does not wish to serve, he may designate a representative to the position. Council member McManus has served as the City’s representative for the past two years.

Southern Nevada Health District and Advisory Board member: Meets the fourth Thursday of each month at 8 a.m. This Board reviews and establishes policy for the Las Vegas Valley in such areas as environmental health, maternal and child health, control of communicable diseases an the further programming of the prolonging of life and the promotion of the well-being of the people of Clark County. The term of office is two years and appointments are made after each election. Council member Shuman has served as the City’s representative for the past two years, and Council member Harhay has served as the Advisory Board member the past two years.

Las Vegas Convention and Visitor’s Authority: Meets the second Tuesday of each month at 9 a.m.  Council member Leavitt served as the City’s representative for the past two years. The term on the Board is coterminous with the term of office on the governing body.

Las Vegas Global Economic Alliance: Meets the third Tuesday of each month at 7 a.m. Its purpose is to develop the economies of Las Vegas, Clark County, Henderson, North Las Vegas, Boulder City, and Mesquite through regional cooperation, global trade, and global connectivity. This has historically been the Mayor’s position. The term of office is the same as the LVCVA; it is coterminous with the member’s term of office on the governing board.

Nevada League of Cities Legislative Committee and Alternate to Board: Meets on an as-needed basis. The term of office is two years, and the appointments are made after each election. The committee makes recommendations regarding legislative matters and possible changes in State law. Council member Harhay served as the City’s representative on the Legislative Committee and the Board of Directors alternate the past two years.

Nevada Public Agency Insurance Pool Board of Directors (POOL)/Public Compensation Trust (PACT): Meets on an as-needed basis, but at least quarterly. There is no official term of office; however, traditionally, appointments have been made after each election. Council member McManus has served as the City’s representative the past two years.

Regional Transportation Commission/Regional Flood Control District: Meets the second Thursday of each month at 8:45 a.m. These Commissions approve capital improvement projects for roads and flood improvements and allocate funds for these projects. This is a joint appointment in that the RFCD meets following the RTC meetings. The term of office is two years, and appointments are made after each election. Mayor Rod Woodbury has served as the City’s representative the past four years.

Southern Nevada Regional Planning Coalition/Clark County Debt Management Commission: Meets monthly on the fourth Thursday of each month at 3 p.m. Additional meetings may be scheduled, as needed. The term of office is two years, and appointments are made after each election. Councilmember McManus has served as the City’s representative the past two years.

Southern Nevada Water Authority: Meets the third Thursday of each month at4 p.m. The term of office is two years and appointments are made after each election. Boulder City is one of the four areas water purveyors, and other members of the Authority include: Las Vegas Valley Water District, and the Cities of Henderson and North Las Vegas. The Authority makes decisions regarding the area’s water supply, including: Capital improvement projects, drought management, and seeking alternative water supply sources. Council member Leavitt served as the City’s representative for the past two years.

Workforce Connections Local Elected Officials (LEO) Consortium Committee: This Committee oversees primary Workforce Connections Board activities such as the appointment of board members, fiduciary responsibilities over local area resources, budget approvals and the coordination of interlocal agreements. The Committee meets the second Tuesday of every other month at 1 p.m. Councilmember Harhay has served as the City’s representative for the past two years.

**All of the above info was gathered together for us by Lisa LaPlante, the City Communications Manager, and as always, we’re grateful for her help!

That list surely does make you appreciate all that these public servants do for us that most of us don’t know or hear much about.

Next week, the City of Boulder... END_OF_DOCUMENT_TOKEN_TO_BE_REPLACED

We are so happy to share that the... END_OF_DOCUMENT_TOKEN_TO_BE_REPLACED

This cool photo was sent to us by... END_OF_DOCUMENT_TOKEN_TO_BE_REPLACED

The Nevada Department of Wildlife... END_OF_DOCUMENT_TOKEN_TO_BE_REPLACED

Fisher Space Pen Co., makers of the iconic ‘Astronaut Space Pen,’ will be inducted into... END_OF_DOCUMENT_TOKEN_TO_BE_REPLACED

Boulder Dam Brewing is hosting more live music in August and we have the details for you... END_OF_DOCUMENT_TOKEN_TO_BE_REPLACED

Desert Sun Realty is pleased to announce an open house at 1209 Avenue I. The open house... END_OF_DOCUMENT_TOKEN_TO_BE_REPLACED

Christ Lutheran is happy to host another pop up shop opportunity at the church, located... END_OF_DOCUMENT_TOKEN_TO_BE_REPLACED