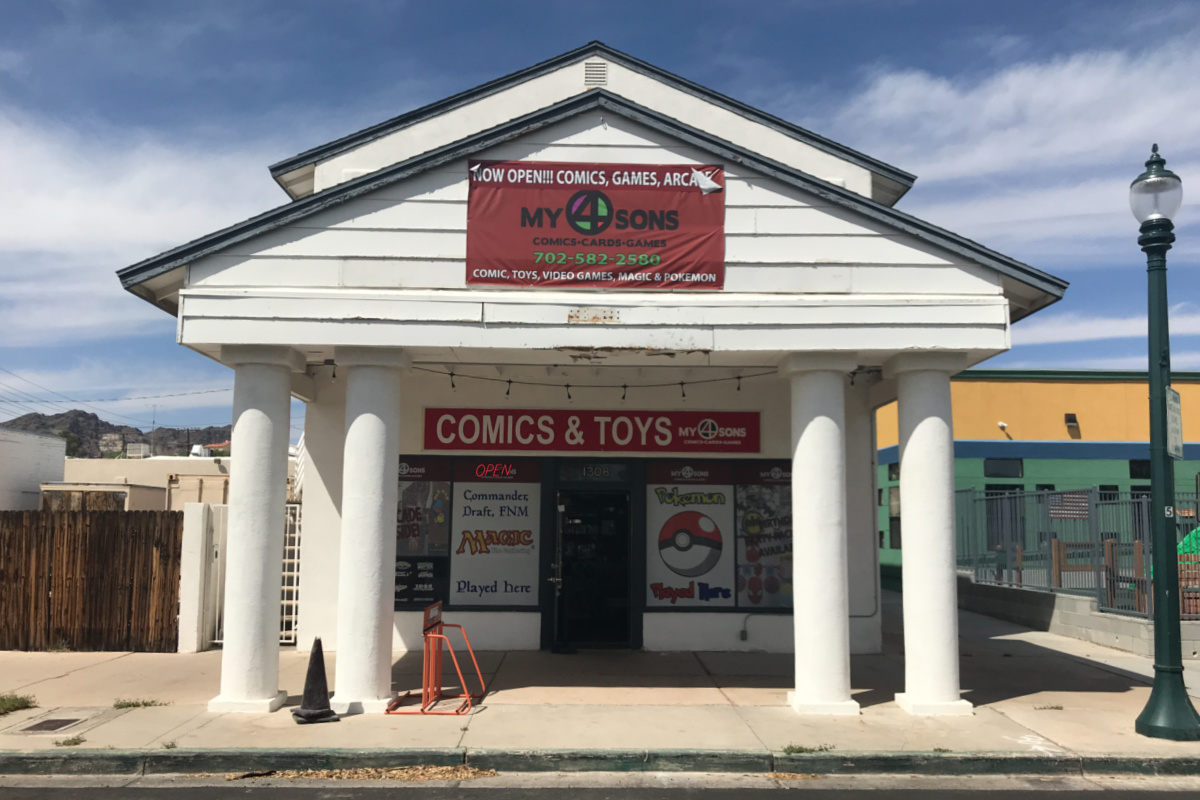 This exciting event came to be through a series of rather extraordinary circumstances. Store owner, Mike Collins, was recovering from a brief hospitalization due to COVID-19 and was contacted last summer by a local television channel looking to do a story on small, independent businesses weathering the effects of the COVID-19 restrictions. The story aired shorty thereafter and was seen by a Las Vegas viewer, the father of Jason David Frank. Mr. Frank’s father contacted his son and the rest, as they say, is history!

Mr. Frank, also known as the Green and White Dragon Ranger, had previously created a program he calls the Power Ranger Protection Program or PPP (a takeoff of the government’s own PPP – Paycheck Protection Program). The purpose of the program is to highlight and support independent gaming stores, like My 4 Sons Comics, Cards and Games during the COVID-19 pandemic. The effects of the shutdown and slowdowns in business for these types of businesses is profound, and this is Mr. Frank’s way of helping small businesses. He travels around the country, at his own expense, and conducts signing events at these independent stores. This is particularly remarkable when you consider that Mr. Frank’s appearances at various “cons” (short for conventions) can command figures in the thousands. Because the con business ground to a halt during the pandemic, customers are itching for a way to connect with their favorite characters and the actors who portray them.

As part of next Sunday’s special event, Mr. Frank will be on hand to sign memorabilia and take photographs with fans for a small fee. The event will also feature staff from JSA Authentication, who will be available to authenticate autographs for collectors. The store owner, Mr. Collins, advises that customers may purchase Power Ranger Funkos, action figures and cards to present for autographs. Mr. Frank will also have the standard 8×10 photographs available as well.

In order to comply with local health restrictions, the store will be handing out tickets, good for up to five people, beginning on Saturday, April 17. The numbered tickets will allow the holders to enjoy some of the other stores, restaurants and other Boulder City establishments while waiting their turn to meet Mr. Frank. Mr. Collins noted that his fellow business owners are very supportive of the event and even allowed him to put up signs advertising the special occasion in their establishments. It should prove to be a benefit to many Boulder City businesses as Mr. Collins is expecting customers from as far as California and New Mexico to come for the signing.

In speaking with Mr. Collins, we learned that he, his lovely wife Angee and their four sons (yes, that’s where the name came from!), Robert, Cameron, Michael and Kalob, attended more than 25 gaming and fan conventions in the year prior to the economic slowdown! With the opening of their store, they hoped to establish a “home base” from which to operate. Frequent visitors to Lake Mead National Recreation Area, they decided that Boulder City would be the ideal place to open their unique shop. Originally located in Marshall Plaza, they moved downtown a few years ago, which allowed them to expand the store’s footprint and inventory. While their motto is “We Sell Anything Nerd Related!”, they offer many types of fun gaming-related items for all customers, kids and adults alike. It was a niche previously untouched in Boulder City. Mr. Collins appreciates both the support of the local Boulder City community, but also tells us that he has regular customers from Henderson and Las Vegas who prefer the easy commute, small town atmosphere and personal service provided at My 4 Sons.

The Collins family possesses not only an entrepreneurial spirit, but a cooperative one too, with others in their line of work. To that end, there will be other gaming vendors onsite Sunday with items for sale for those attending the signing event. “It’s a way for me to give back to those who have supported me and my family,” Mr. Collins noted during a recent interview.

This collaborative spirit is also present during the recently resumed Wine Walks, hosted by the Boulder City Chamber of Commerce. My 4 Sons is one of the destinations for the popular events, and a chance for the Collins family to showcase their special store and local charm to those who otherwise may not have the inclination to patronize the store.

With this signing event, Mr. Collins hopes to offer similar opportunities in the future, hopefully on a monthly or bimonthly basis. The success of this weekend’s event will provide a baseline to measure the community’s desire for similar opportunities. Mr. Frank has been heavily promoting his appearance via his social media accounts, in addition to the advertising done by the store.

We are looking forward to meeting Green and White Ranger Jason David Frank and his fans on Sunday! 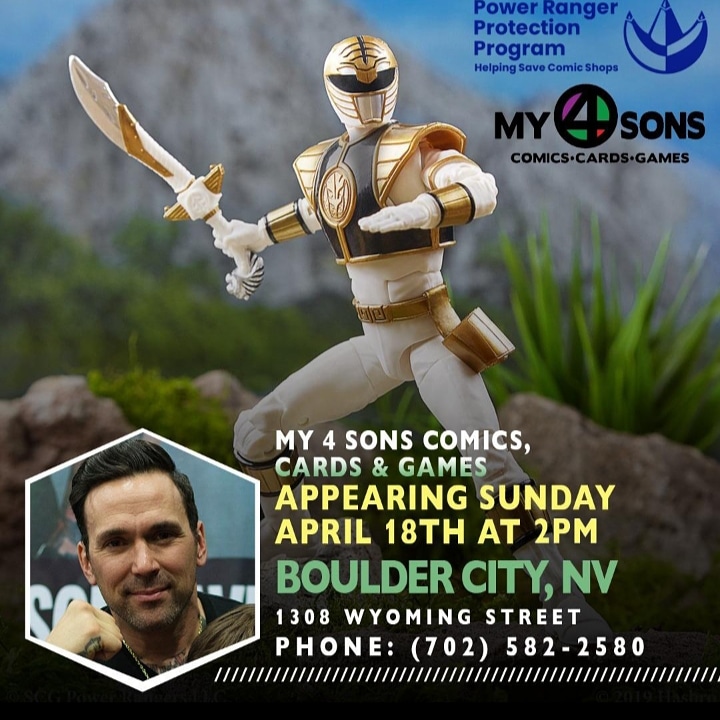 Well, folks, we learn something... END_OF_DOCUMENT_TOKEN_TO_BE_REPLACED

We recently had a lovely... END_OF_DOCUMENT_TOKEN_TO_BE_REPLACED

No doubt you’ve heard – or... END_OF_DOCUMENT_TOKEN_TO_BE_REPLACED

With Father’s Day just around the corner, Toto’s Mexican Restaurant is... END_OF_DOCUMENT_TOKEN_TO_BE_REPLACED

Hello, I am excited to start my journey here at Jack and the Beanstalk! My name is... END_OF_DOCUMENT_TOKEN_TO_BE_REPLACED

The Dam Roast House is inviting you to have coffee with your Congresswoman Susie... END_OF_DOCUMENT_TOKEN_TO_BE_REPLACED