You are here: Home / Town Happenings / Who Remembers Penny Power Day in 1985?

Who Remembers Penny Power Day in 1985? 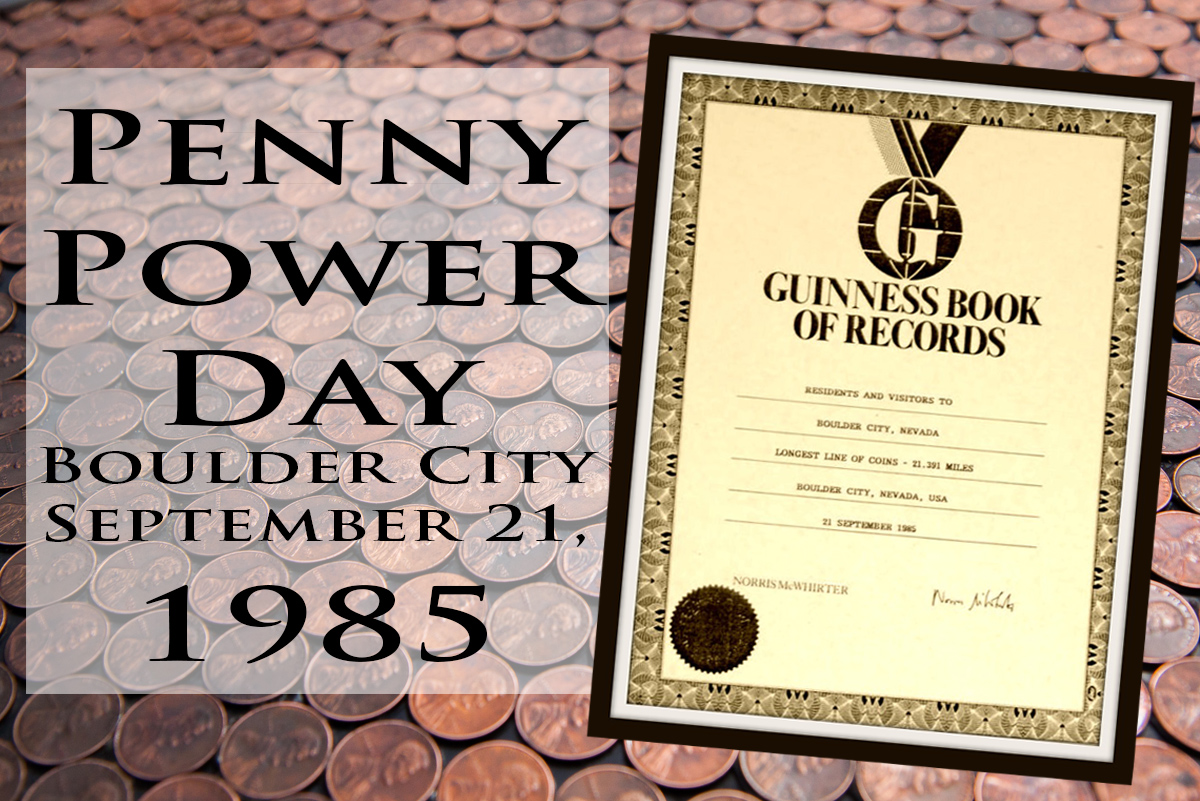 This is sort of a funny story, but when we learned about this event we asked a few friends and none of them remembered it – so we had to share this with you! It appears that September 21 was a very auspicious anniversary here in Boulder City…

It started a few days ago when a new friend of ours, Felix Lenox, a Historian for the Nevada Armored Transport organization (Facebook page for you HERE) reached out asking us who was the Mayor of Boulder City in 1985. We checked that out, and found out it was the much beloved Robert ‘Bob’ Ferraro. But we wondered, ‘why does he want to know…?’ and asked Felix what was up there. And we learned a completely fascinating and fun story!

Apparently, on September 21st, 1985 the citizens of Boulder City banded together to help celebrate the 50 Year Anniversary of Hoover Dam by setting a world record! A local BC businessman, Kae Pohe was the brainchild behind this feat that was months in the planning. He decided to create Penny Power Day and set a new Guinness World Record by laying the world’s longest route of pennies – over 21 miles long. Which equates to 1,807,296 pennies, to be exact! This shattered the previous world record of about 10 miles of pennies laid side by side. You can see the route from this news article below: 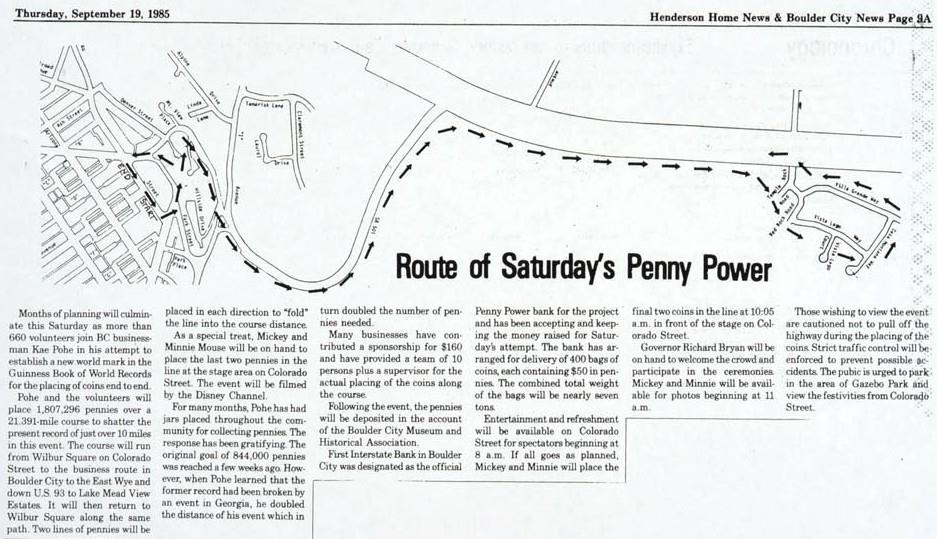 The Armored Transport of Nevada, Inc. is who hauled all those coins into town, weighing over 7 tons total! What’s even more remarkable, is that 2,120 people participated in the actual penny laying line, and that this was all done IN A SINGLE DAY! Now that’s some penny pushing, or pinching…whatever!

On hand at the end were all sorts of visiting dignitaries, and to lay down the final two pennies were none other than Mickey and Mini Mouse! You can read the full story and see more pics and info on this Facebook Post HERE.

We’ve rounded up an assortment of photos and other articles for you to enjoy reading about this little sliver of Boulder City’s past. All Photos courtesy of Nevada Armored Transport.

Well, folks, we learn something... END_OF_DOCUMENT_TOKEN_TO_BE_REPLACED

We recently had a lovely... END_OF_DOCUMENT_TOKEN_TO_BE_REPLACED

No doubt you’ve heard – or... END_OF_DOCUMENT_TOKEN_TO_BE_REPLACED

With Father’s Day just around the corner, Toto’s Mexican Restaurant is... END_OF_DOCUMENT_TOKEN_TO_BE_REPLACED

Hello, I am excited to start my journey here at Jack and the Beanstalk! My name is... END_OF_DOCUMENT_TOKEN_TO_BE_REPLACED

The Dam Roast House is inviting you to have coffee with your Congresswoman Susie... END_OF_DOCUMENT_TOKEN_TO_BE_REPLACED