You are here: Home / Town Happenings / A New Landscape At Parks & Rec

A New Landscape At Parks & Rec 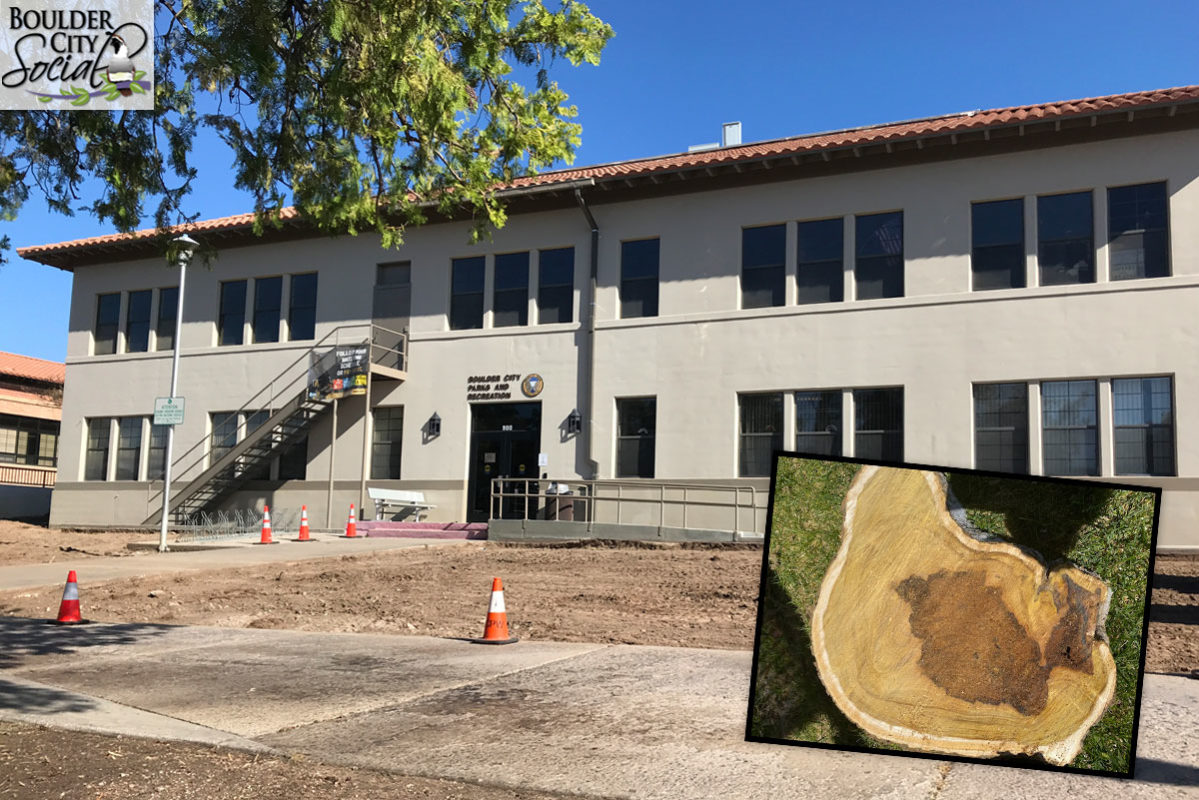 If you haven’t walked or driven by the area lately in front of the Boulder City Parks & Recreation Building, (900 Arizona Street) then you may be shocked to see the lawn missing along with those two lovely mature shade trees out front. What’s going on?

Unfortunately those beautiful trees  had developed a fungus and were suffering from what would eventually be a catastrophic failure and could not be saved, according to a Board-Certified Master Arborist. As the trees die, there was apparently even the risk of them falling and causing significant damage, so they had to be removed. The City approved the work as part of this year’s budget back in 2019, and now work began first with the removal of the trees, including their extensive root systems.

Since that meant ripping everything up, they decided to make some improvements at the same time. They will replace what was there with a more efficient irrigation system. Apparently the old one was too close to the building, causing issues with water damage to the facility itself.

Now, the trees will be replaced with two new ones, Chinese Pistache which are more drought-resistant and low maintenance. The trees will be around 12-15 feet tall when installed, and will eventually grow to a height of around 30+ feet.

Some residents have understandably been disappointed not only at the need for this, but the timing. The City assures us that before removal, the leaves had not yet fully grown, so they were able to determine there were no nesting birds in them before cutting the trees down.

The lawn will be replaced with more drought-tolerant bermuda grass, and new shrubs will be planted as well. The total budget for the project is $85,000 and right now they are anticipating it will come in at or below that number.

Well, folks, we learn something... END_OF_DOCUMENT_TOKEN_TO_BE_REPLACED

We recently had a lovely... END_OF_DOCUMENT_TOKEN_TO_BE_REPLACED

No doubt you’ve heard – or... END_OF_DOCUMENT_TOKEN_TO_BE_REPLACED

With Father’s Day just around the corner, Toto’s Mexican Restaurant is... END_OF_DOCUMENT_TOKEN_TO_BE_REPLACED

Hello, I am excited to start my journey here at Jack and the Beanstalk! My name is... END_OF_DOCUMENT_TOKEN_TO_BE_REPLACED

The Dam Roast House is inviting you to have coffee with your Congresswoman Susie... END_OF_DOCUMENT_TOKEN_TO_BE_REPLACED