You are here: Home / Town Happenings / Our Own Pelican at the Fishing Pond!

Our Own Pelican at the Fishing Pond!

Now, you know it’s KILLING me not to call this post my ‘Pelican Brief’, right? Those of you who know me understand what great restraint I’ve shown (but realize that I did manage to work it in there)!

Earlier this month, Fan Lisa Martinelli Truax asked if anyone had any info about the pelican that was over at the fishing pond and we were feeling bad that he was so far from home (I’m assuming it’s a he – but I don’t really know, just FYI). But it turns out that we actually have pelicans living here in Nevada…so this might BE his home!

Lisa and Dave sent in the below photo of him and below that, I’ve copied an an excerpt from the Nevada Department of Wildlife website about pelicans in Nevada. Now you’ll know more about our not-so-little friend if you go see him up at the fishing pond! 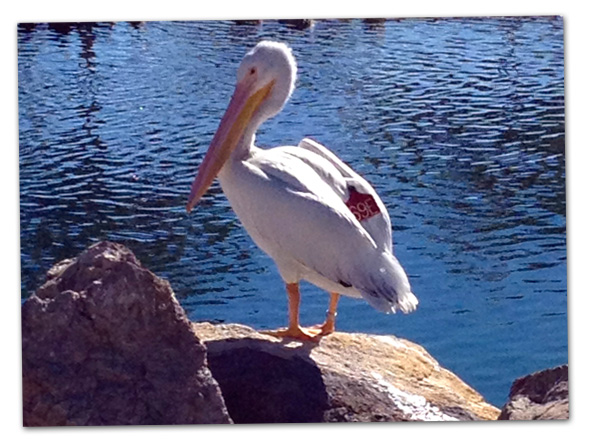 DESCRIPTION:
The American white pelican is a large, white, water bird. It has a very large orange/yellow bill with a pouch and black primary and outer secondary feathers. It flies with its neck tucked. Juveniles have a grayish bill and black plumage on the back of their heads.

LIFE SPAN :
While they may live to be 30 years old, the average life expectancy is probably between 15 and 20 years.

FOOD HABITS:
The diet consists mainly of fish, but salamanders and crayfish may also be eaten. The birds scoop up fish while swimming. They often work cooperatively, forming a semicircle in shallow water to herd fish.

BREEDING:
One to three eggs are laid and incubated for an average of 31 to 32 days by both parents. Usually only one chick survives to fledging. Both parents tend the young, which leave the nest in approximately 21 to 28 days to join other young in a group. Full fledging occurs at 9 to 10 weeks and sexual maturity is reached at about 3 years of age.

Anaho Island, located at Pyramid Lake, Nevada, supports one of the highest breeding colonies of American White Pelicans in the Western United States. Anaho Island National Wildlife Refuge on the eastern shoreline of Pyramid Lake, Washoe County in Nevada was established in 1913 as a Sanctuary for colonial nesting birds, primarily American White Pelicans. In recent years, between 8000 and 10,000 pelicans have returned from their wintering grounds in Southern California and Baja, Mexico.

STATUS:
Nesting populations in Nevada fluctuate greatly, cycling between high (over 6,000) to very low (zero) numbers of nesting pairs within two to three years. American white pelicans are given priority focus for conservation in the Nevada Partners in Flight Bird Conservation Plan. The species receives protection under the Migratory Bird Treaty Act.

REASON FOR STATUS:
Breeding colonies are considered vulnerable to environmental change due to the relative scarcity of suitable nesting sites. Threats include habitat loss, water level problems as a result of drought, predation, pesticide contamination, and disturbance or shooting by humans.

Next week, the City of Boulder... END_OF_DOCUMENT_TOKEN_TO_BE_REPLACED

We are so happy to share that the... END_OF_DOCUMENT_TOKEN_TO_BE_REPLACED

This cool photo was sent to us by... END_OF_DOCUMENT_TOKEN_TO_BE_REPLACED

The Nevada Department of Wildlife... END_OF_DOCUMENT_TOKEN_TO_BE_REPLACED

Fisher Space Pen Co., makers of the iconic ‘Astronaut Space Pen,’ will be inducted into... END_OF_DOCUMENT_TOKEN_TO_BE_REPLACED

Boulder Dam Brewing is hosting more live music in August and we have the details for you... END_OF_DOCUMENT_TOKEN_TO_BE_REPLACED

Desert Sun Realty is pleased to announce an open house at 1209 Avenue I. The open house... END_OF_DOCUMENT_TOKEN_TO_BE_REPLACED

Christ Lutheran is happy to host another pop up shop opportunity at the church, located... END_OF_DOCUMENT_TOKEN_TO_BE_REPLACED