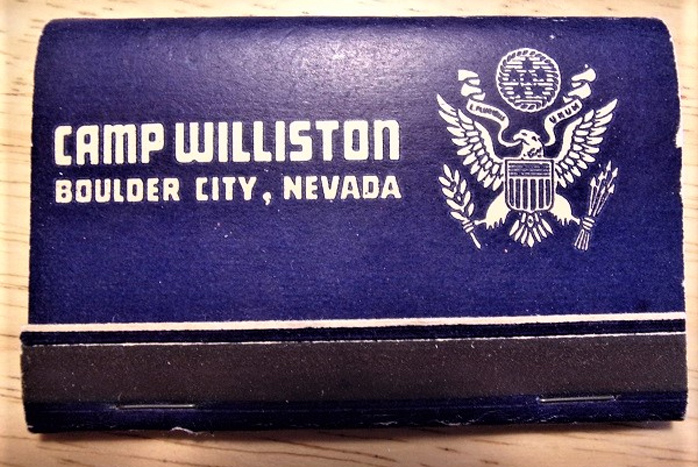 Well, now isn’t this a throwback to the earliest days of Boulder City! Camp Williston was originally established as Camp Sibert during World War II. It was renamed Camp Williston on September 21, 1942. The camp was named after Brigadier General Edward B. Williston, a Civil War Medal of Honor recipient.

The camp provided military police training for Army personnel and protection for both Boulder Dam facilities and the town. Approximately 800 people were stationed there until March 9, 1944, when the camp closed. The location was approximately where Boulder City High School (@bouldercityhs) and the Fifth Street LDS Ward properties are now.

You can see, from the eagle symbol featured, that these matches were issued prior to the redesign of the Presidential seal authorized by President Harry S Truman in 1945. The eagle faces toward the olive branch in its right talon. No, the eagle’s head doesn’t turn its head in wartime!

Thank you so much to dear reader, Ron Martin for sending this to us!

The Big Dam Pizza Challenge is on and scheduled for Sunday, May 16 at 2:00PM at … END_OF_DOCUMENT_TOKEN_TO_BE_REPLACED