You are here: Home / Town Happenings / Browder Building Soon to be Part of the Fox Family Businesses

Browder Building Soon to be Part of the Fox Family Businesses 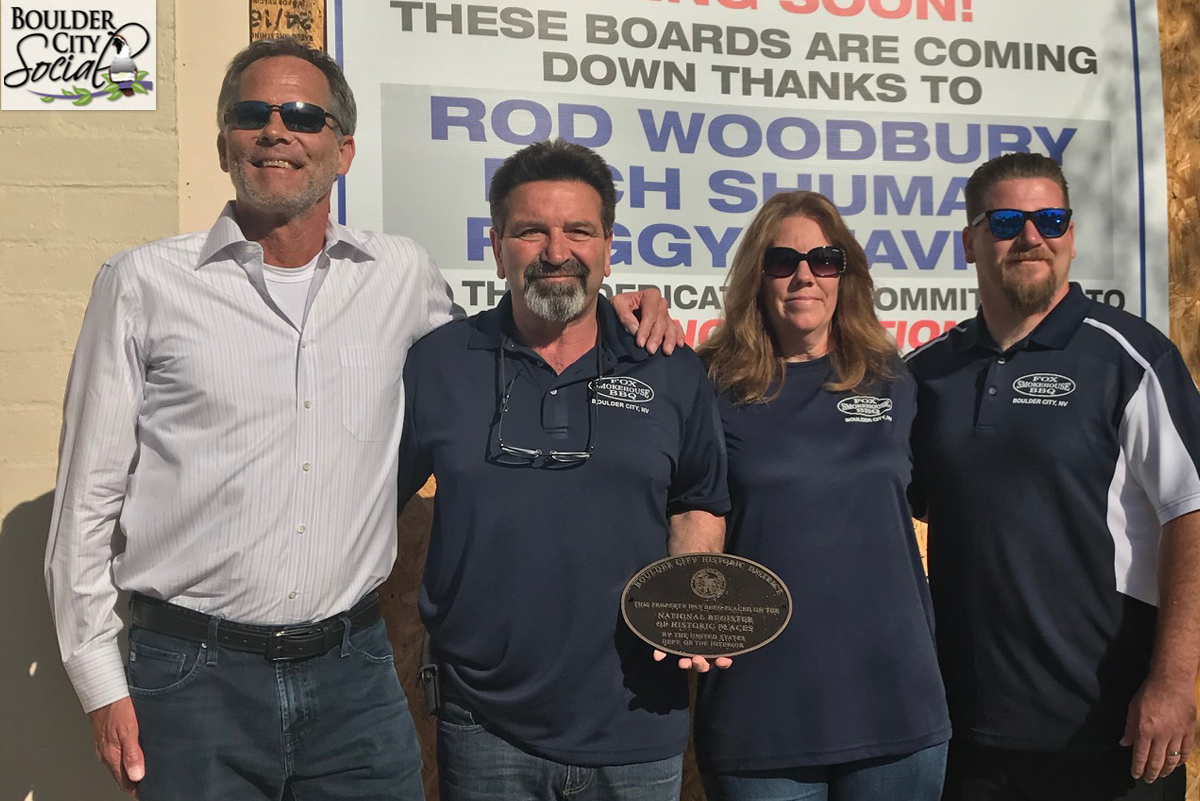 This Saturday the news broke that the Historic Browder Building (formerly Mel’s Diner at 500 Nevada Way) is being sold. And this morning a formal announcement was made by Mayor Rod Woodbury, along with current owner Charles Lawson and the soon-to-be new owners, Dan and Kelly Fox and son Matthew, the family that owns Fox Smokehouse BBQ!

The ink isn’t yet dry on this deal, that is expected to close sometime in the next couple of weeks, but all parties obviously feel confident enough to make this important announcement!

Dan Fox says candidly, they are not yet certain exactly what form this establishment will take. Most of you know they are currently finishing their remodel and opening of their new location, at the former Casa Flores spot, 930 Nevada Way. Dan says that they will continue to focus their efforts on getting that establishment open this fall, in the Sept./Oct. time-frame.

When we spoke to Kelly Fox, she said that they were honored that Charles entrusted them to this location. According to statements this morning, the Fox BBQ establishment had catered various events for Charles over the past few years, and their relationship grew naturally from there.

Beyond this news, we wanted to share the raw video coverage of this announcement. In it you’ll hear from Mayor Rod Woodbury on the history of both Ida Browder and her business and the building that came to bear her name. But beyond that, you’ll hear a few words from owner Charles Lawson, about the evolution of how we came to be here, now.

We know these two videos are a bit long, but we think this is worth the share, so that everyone can see and hear what was said today – in their own words. (Sorry folks, there are two videos because of an interruption in my recording process. Also, apologies for the random street noises that are present.)

In closing, I’ll share this thought. I’m a blogger, and (hopefully) one source of reliable news in Boulder City. But because I’m a blogger and not a journalist, I get to sometimes express opinions or personal observations – although I always try to be fair. So, I’ll say this: when these signs were posted on Saturday and the news broke, we didn’t know the back story – none of us did. In the video above, Charles Lawson lays out his points of view quite clearly. I haven’t always agreed with his tactics, but do appreciate much of what he has to say. So I’m simply saying that every once in a while, we might want to step back, listen, and take each other at our words. We need each other in this community – period. So in the spirit of progress and positive forward momentum, let’s look forward to better days for this building, and Boulder City too.

Next week, the City of Boulder... END_OF_DOCUMENT_TOKEN_TO_BE_REPLACED

We are so happy to share that the... END_OF_DOCUMENT_TOKEN_TO_BE_REPLACED

This cool photo was sent to us by... END_OF_DOCUMENT_TOKEN_TO_BE_REPLACED

The Nevada Department of Wildlife... END_OF_DOCUMENT_TOKEN_TO_BE_REPLACED

Fisher Space Pen Co., makers of the iconic ‘Astronaut Space Pen,’ will be inducted into... END_OF_DOCUMENT_TOKEN_TO_BE_REPLACED

Boulder Dam Brewing is hosting more live music in August and we have the details for you... END_OF_DOCUMENT_TOKEN_TO_BE_REPLACED

Desert Sun Realty is pleased to announce an open house at 1209 Avenue I. The open house... END_OF_DOCUMENT_TOKEN_TO_BE_REPLACED

Christ Lutheran is happy to host another pop up shop opportunity at the church, located... END_OF_DOCUMENT_TOKEN_TO_BE_REPLACED